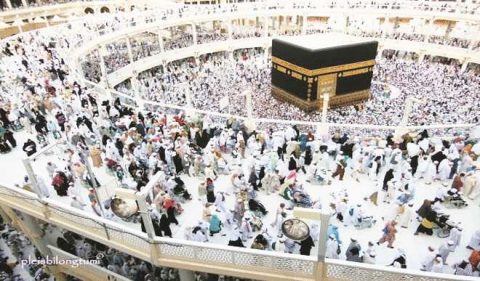 LAGOS, NIGERIA (AFRICAN EXAMINER) – Lagos State intending pilgrims have been advised to be law abiding, adhere to the teachings of Islam and inculcate the rudiments of the religion to justify the lectures received at seminars organized by the State government as part of preparations for the 2017 Hajj exercise.

This advice was given by the Executive Secretary of the Lagos State Muslim Pilgrims Welfare Board, Mr. Muftau Okoya while addressing the pilgrims before the departure of the third batch of the State pilgrims to Saudi Arabia.

Okoya emphasized the need for the pilgrims to adhere strictly to the rules and regulations of the holy pilgrimage, imploring them to also abide by the laws of Saudi Arabia in order to enjoy benefits of the hajj exercise.

“Be patient, obedient and use the opportunity of this spiritual exercise to pray for Lagos State and the President of Nigeria. There are only two States in Nigeria, Lagos State and others”, he reiterated.

He disclosed that the second flight of Lagos pilgrims departed the Muritala International Airport last weekend with 221 intending pilgrims from Amuwo-Odofin, Eti-Osa, Ojo/Badagry, Apapa and some members of the medical team.

The Executive Secretary added that another 220 pilgrims departed on the third flight on Monday, August 7, 2017 to Saudi Arabia while the fourth flight is expected to airlift 460 intending pilgrims to the holy land shortly afterward.

He explained that this year’s Hajj operation has been successful but not without some challenges, which to a large extent have been addressed.