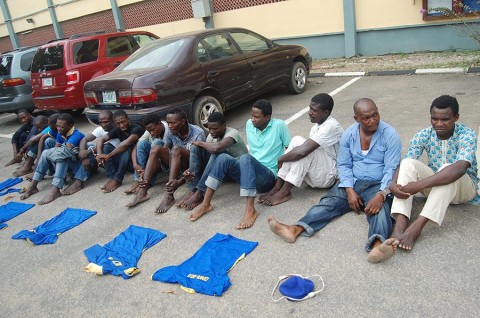 A thirteen-man cult group, one of them has the same name with the Lagos State Governor, Babatunde Fashola, was on Tuesday paraded by the state police command. 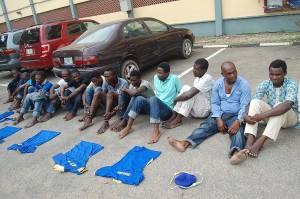 The governor’s namesake, Fashola, a 22vyears old Disc Jockey (DJ) who hails from Ogun State however deny being a member of the cult.

He accordingly stated that the musical instruments recovered at the scene of crime belonged to him but stressed that one Shakiru, who is a member of Supremost Eye Confraternity had in his absent taken away the said musical instrument without his knowledge for a party organise by members of the Confraternity at 50-50 Hotel situated at Igbokosun in the Lekki area of Lagos,

He further explained that on his arrival at his shop, he was informed that Shakiru had collected the musical instrument, which made him to confront the said Shakiru at the Hotel.

According to Fashola, Shakiru agreed to pay for the period they will make use of the instrument and that it was while he was waiting for his money that policeman swooped on them.

Commissioner of Police, Mr. Manko Umar, however told crime reporters that on the 1st March 2014, at about 03.55, upon a distress call received by the DPO Ilasan Division, Lekki Lagos, that a groups of hoodlums/cultists were converging at 5050 Hotel situation at igbokosun Lagos and that from their body language, they were about to perpetrate evil.

He further said that based on the information, Policemen led by CSP Gbenga Olurunfemi, the Divisional Police Officer proceeded to the scene noting that on sighting the Policemen, the cultist were said to have taken to their heels.

Manko further said that the Policemen gave a hot pursuit and subsequently arrested thirteen of the cultist who were wearing a shirt vest bearing Supremost Eye confraternity.

Further investigation according to Manko revealed that the celebration was a ‘birthday’ for new members who have just been initiated into the cult and that those who converged at the Hotel on the fateful day were members drawn from Bariga, Ajah in Lagos state and those from Ogun State.