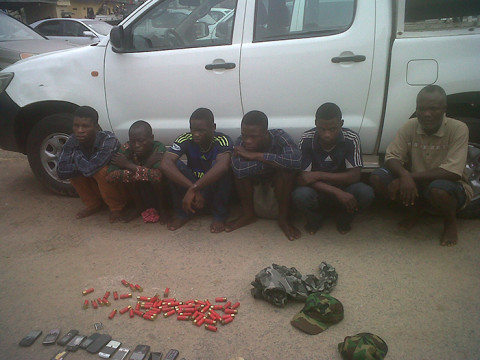 Six suspected armed robbers were on Wednesday paraded at the Lagos police Command, Ikeja for robbing members of a church of their church offering on cross over night on December 31st, 2013. 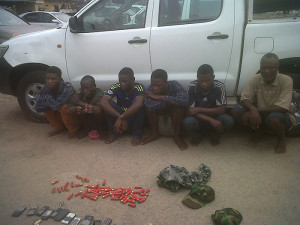 The robbers thereafter carted away valuables, including IPADS, IPODS, phone, jewelries and the church offering.

On the New Year day however, the suspected robbers, robbed the house of one of the church member at Moninola Street, Vespa, Ijanikin, but nemesis caught up with them as the house occupants were brave enough to engage them.

As a result they fled, forgetting one of their weapons.  The PPRO further said that one of the gang members Hassan Ado on 2nd of January, “foolishly” went to the street to ask some area boys if they had seen any gun, the community was alerted about it and he was apprehended.

This led to the arrest of five more gang members, including Abbey Edward, a Benin Republic National who had so far supplied the gang five double barrel locally made pistols he imported into Nigeria from his home country, and sold the gun to Aboidun Olanrewaju at the rate of N7,000 each.

Olanrewaju in turn sold the gun to the gang at N20,000 each.  All the suspects confessed to the armed robbery.

One of them, Adewale Osoja who spoke with African Examiner,  said, “the day after we robbed the church, we went to the house of one Mr. Sam who is a member of the church and robbed him, the money we got from the church offering we robbed is N48,000. All of us grew up as friends but we started stealing when we were initiated into Eye cult group”.

Another gang member also told African Examiner how he got involved with the suspects, he said “I live in Agbara, but I am a citizen of Benin Republic, the gang member nicknamed “baba abey”, a member of OPC vigilante group discovered a place where they make locally made gun, he approached me to help the gang cross the gun into Nigeria, but they buy the gun themselves, but they give me N7,000 to cross them.”