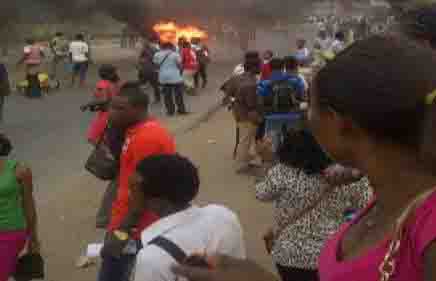 Students of the Lagos State University, LASU, have gone on rampage destroying the school properties, burning tyres on the expressway and disrupting the schools second semester examination. 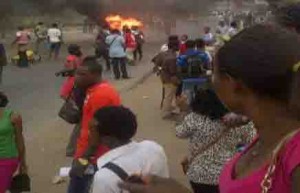 The students were disenchanted with the management of the school for deciding to close the registration portal against about 1,292 students of the institution who had not yet registered for the second semester examination.

The examination, which was to begin today was disrupted by the students as they vowed not to carry over their courses to the next semester due to their inability to pay the exorbitant school fees charged by the school.

It was gathered that the Vice Chancellor of the school, Prof. John Obafunwa had said that only the 708 students who were able to register before the portal was shut would sit for the examination, but the students stood against this defiantly.

Very early in the morning on Thursday, the irate students blocked the Badagry expressway and the school gate and ignited bonfire spoiling for a showdown with the management of the institution for shutting out over 1,500 students from writing the second semester examination.

The school’s vice chancellor was said to have been attacked by the students and management to escape from the school to avoid being killed.

It was learnt that when the Students Union of the school pleaded with the vice chancellor to extent the registration to allow the students enroll for their courses, he turned deaf ears.

Obafunwa was said to have stated that since about 11,300 students had so far registered, the 1,292 students who were yet to register were infinitesimal and could carry over their courses, but the belligerent students decided to take laws into their hands by going on rampage.

Governor Babatunde Fashola had two years ago implemented outrageous fees to be paid by LASU students which went up by over 300 percent.

LASU is now the most expensive university among the federal and state owned institutions as the fees have skyrocketed astronomically.