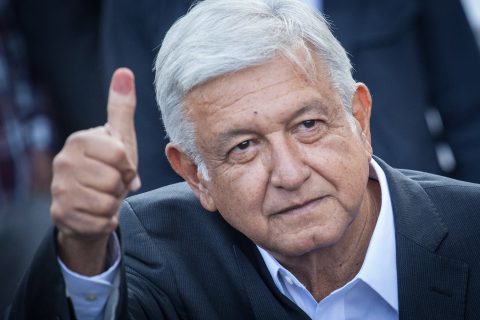 In his victory speech, Obrador said: “profound change”  adding “we will pursue a relationship of friendship and co-operation with the United States, always rooted in mutual respect and in the defence of our fellow Mexicans who live and work honourably in that country.”

The ex-Mexico City Mayor, known by his initials Amlo, is projected to win about 53 per cent. His rivals have conceded in a crushing defeat for the main parties.

Mr. Obrador’s key pledge is to tackle “evil” of corruption.

The President-elect has been highly critical of President Donald Trump and ties with the US.

Relations with Washington have been hugely strained, with Mr. Trump strongly criticizing Mexico over trade and migration. Mr. Trump has sent a tweet of congratulations.

Mr. Trump has riled Mexico by saying he will renegotiate the North American Free Trade Agreement (Nafta) and build a wall along the US-Mexico border.

His hardline stance on migration – particularly the separation of migrant families at the US border – has brought widespread condemnation.

Some 2,000 children remain separated from their migrant parents, despite Mr. Trump agreeing to curtail the policy.

However, some opponents have expressed fears that his leftist and populist policies could damage the already sluggish economy and turn Mexico into “another Venezuela”, which is suffering a deep economic crisis and rampant inflation.