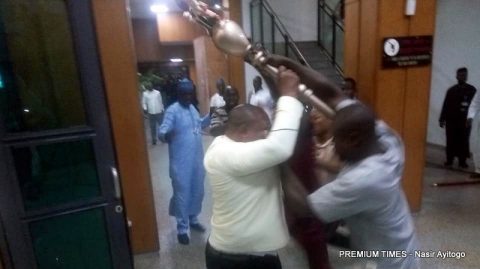 ABUJA, NIGERIA (AFRICAN EXAMINER) – The joint committee of the Senate and House of Representatives investigating the inavasion of the upper Legislative Chamber and stealing of mace recently has summoned Senators Ovie Omo-Agege and Ali Ndume over the drama.

Reports say the Chairman of the investigative committee, Senator Bala Ibn Na’Allah, issued the summon at the committee’ meeting held in Abuja Tuesday.

The Tuesday’s summon is sequel to testimonies from heads of different security agencies within the National Assembly NASS which alleged that Senator Omo-Agege (APC, Delta central) led seven unauthorised personnel into the Legislative Chamber and subsequently disrupted the plenary session of Wednesday, April 18, 2018.

On his own, Senator Ndume (APC, Borno State South) allegedly prevented the mace keeper to stop the stalling of the authority symbol.

While reading the summon, Senator Na’ Allah said following ”the testimony of the sergeant at arms before the committee, you (Mr Ndume) are alleged to have prevented the mace keeper from taking away the mace to safety”.

The Lawmaker read further: “The committee has, therefore, deemed it necessary to invite you in order to respond to that allegation.

“As regards to Omo-Agege, based on the testimony of the DPO, the SSS and the sergeant at arms, you are alleged to have entered the National Assembly accompanied by seven persons who allegedly took the mace of the Senate during plenary session on April 18, at about 11:30am.

“All those who testified, stated that the said people were cleared into the chamber based on your confirmation that they were with you.

“The committee, in pursuance of this, has deemed it necessary to formally invite you to respond to these allegations on Wednesday, May 16 at 11:00am,” Mr Na’Allah read out the format of the letter to be issued to the summoned lawmakers.

Ndume also once suspended over issues relating to confirmation of Ibrahim Magu as the EFCC substantive Chairman and Omo-Agege are the Leaders of the pro-President Muhammadu Buhari Lawmakers Forum.