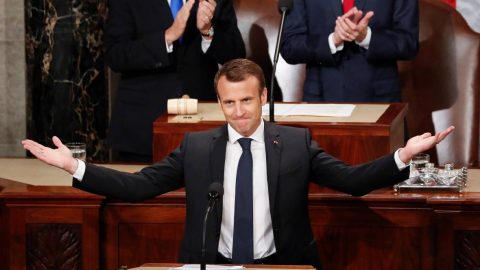 Capping a three-day visit to the U.S., Macron told a joint meeting of Congress that isolationism and nationalism were “a tempting remedy for our fears.’’

But he said international engagement was the only solution.

“This requires — more than ever — the U.S. involvement as your role was decisive for creating and guarding today’s free world.

The U.S. is the one, who invented this multilateralism. You are the one now, who has to help preserve and reinvent it,” he said.

Earlier on his visit, Macron pushed President Donald Trump to salvage the Iran nuclear deal, which Trump has criticised harshly, and forge a new approach that would also incorporate other U.S. and European concerns.

On Tuesday, the two leaders pledged to seek stronger measures to contain Iran but Trump made no

commitments to stay in the 2015 nuclear deal.

He also threatened Tehran with retaliation if it restarted its nuclear programme.

Macron has pushed for a new approach that would see the U.S. and Europe agree to block any Iranian nuclear activity until 2025 and beyond, address Iran’s ballistic missile programme and generate conditions for a political solution to contain Iran in Yemen, Syria, Iraq and Lebanon.

“I think we can work together to build this comprehensive deal for the whole region, for our people, because I think it fairly addresses our concerns,” he said. (Reuters/NAN)