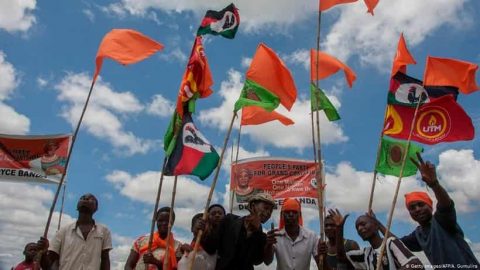 (AFRICAN EXAMINER)- Malawians on Tuesday headed to the polls in a historic re-run of 2019 presidential elections that were declared null and void by the country’s Constitutional Court.

In February, the court found that the elections, which saw incumbent President Peter Mutharika narrowly re-elected for a five-year term, had been riddled with irregularities and ordered a re-run.

There was a large turnout in the cities of Blantyre, Lilongwe, Mzuzu and Zomba, with some voters arriving an hour before stations opened at 6 am (04:00 GMT). Voting proceeded without major incident.

Voter Sarah Mitiyani told dpa that she was pleased the 2019 results had been annulled.

“People’s wishes through their choices should prevail,’’ she said, adding that she had decided to vote again despite coronavirus fears.

Some Malawians, however, did not adhere to precautions as they cast their votes for one of three main candidates in the race.

Mutharika, of the Democratic Progressive Party, Lazarus Chakwera from the Malawi Congress Party and Peter Kuwani of the Mbakuwaku Movement for Development are in the running.

Competition is tense, with many hoping for change in the impoverished former British colony where most people are dependent on aid.

Human Rights Watch has reported various civil groups’ concerns about an increase in violence towards opposition politicians, activists and journalists, and called for authorities to ensure free and fair elections this time around.

Kachale said his desire was to conduct nothing but a “credible election.” (/NAN)