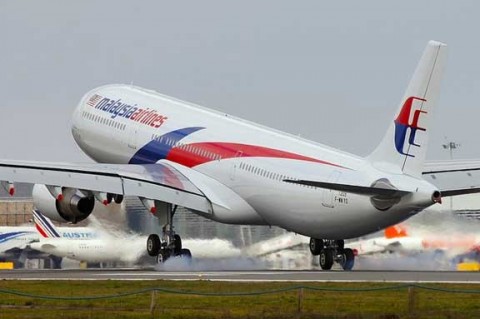 (Reuters) – A Malaysia Airlines flight carrying 227 passengers and 12 crew went missing over the South China Sea on Saturday, presumed crashed, as ships and planes from countries closest to its flight path scoured a large search area for any wreckage.

Vietnamese state media, quoting a senior naval official, had reported that the Boeing 777-200ER flight from Kuala Lumpur to Beijing had crashed off south Vietnam. Malaysia’s transport minister later denied any crash scene had been identified.

“We are doing everything in our power to locate the plane.

We are doing everything we can to ensure every possible angle has been addressed,” Transport Minister Hishamuddin Hussein told reporters near the Kuala Lumpur International Airport.

Vietnamese Admiral Ngo Van Phat later qualified his earlier remarks about a crash site having been identified and told Reuters he was referring to a presumed location beneath the plane’s flight path, using information supplied by Malaysia

A crash, if confirmed, would likely mark the U.S.-built Boeing 777-200ER airliner’s deadliest incident since entering service 19 years ago.

The plane disappeared without giving a distress signal – a chilling echo of an Air France flight that crashed into the South Atlantic on June 1, 2009, killing all 228 people on board. It vanished for hours before wreckage was found.

Search and rescue vessels from the Malaysian maritime enforcement agency reached the area where the plane last made contact at about 4.30 p.m. Singapore time (0830 GMT) but saw no immediate sign of wreckage, a Malaysian Maritime Enforcement Agency told Reuters.