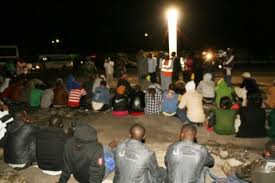 Management of Peace Mass Transit, PMT, Enugu says it has evacuated about thirty- one (31) stranded Nigerian from the war-torn Central African Republic where political and religious crisis have claimed dozens of souls.

The returnees mostly from Enugu State who were so happy had among them, six women in their midst, ten children and fifteen men.

Welcoming the returnees at the terminal of the Enugu State Transport Company, ENTRCO, Tuesday, General Manager, PMT, Mr. Ozioko Sylvanus, said: “ We are doing this as part of our Co-operate Social Responsibility, CSR, to support Enugu State Government, our home State.

He said “These our brothers and sisters who were caught in the web of violence in Central African Republic were conveyed back to re-unite with their families by the management of PMT free of charge.

“We have done so to support Enugu State Government and the Federal Government.

According to him, “Enugu State Government reached out to PMT through its liaison office at Abuja to help, and as part of our CSR to lend a helping hand and partner with Enugu State to bring our indigenes back to their state.

“We will never relent on our vision of putting the people first.   The returnees he said, will be handed over to the General Manager, ENTRACO”.

However, One of the returnees, Mr. Joseph Ani   who hails from Aniri Local Government of Enugu State who could not hold back his tears of joy and gratitude to the management of PMT for coming to their assistance.

Our correspondent reports that the political and religious crisis in Central African Republic attained a crescendo were killings was rife which endangered our lives. We have been in Nigerian Consular in Bangi for more than one month and no help was forth coming.

“We are tremendously grateful to the management of PMT for this gesture which came at no expense.  Continuing, ” The magnanimity of the PMT is outstanding and I call on other companies in Nigeria to toe the path of PMT” he stated.