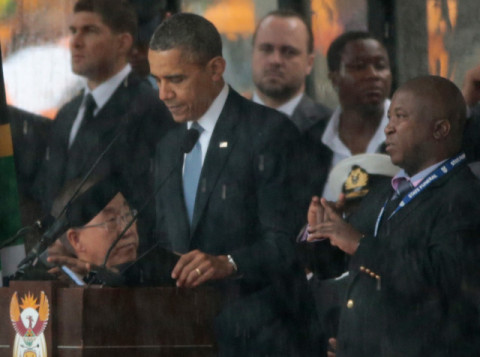 The sign-language interpreter at Nelson Mandela’s memorial service, who sparked outrage when it was revealed his signing was fake, was also accused of murder in 2003, according to a new local news report. 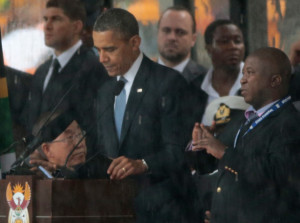 He also faced rape and theft charges in 1994, housebreaking charges in 1997, and malicious damage to property charges in 1998, according to eNCA.Jantjie was acquitted on the rape charge, eNCA reports,  but many of the other charges against him were dropped, it’s unclear if he ever served time in prison, and the station reports the court file in one case is “mysteriously empty.” Jantjie hasn’t commented on the 2003 case.

A government spokeswoman said Friday that officials are investigating reports of accusations against Jantjie and ”we will come back and give a full report,” according to the Associated Press.

Jantjie, who has said he is being treated for schizophrenia, told the Johannesburg Star  that he began hearing voices during Tuesday’s memorial service for the late South African president, making it hard to concentrate on interpreting, but that he felt he had no choice but to stay on stage and continue.

“There was nothing I could do. I was alone in a very dangerous situation. I tried to control myself and not show the world what was going on. I am very sorry, it’s the situation I found myself in,” he said.

But advocates for the deaf quickly labeled him a fake during the memorial.

Mystery continues to surround exactly how he made it onto a stage with so many world leaders. The South African government is investigating, and one official said Thursday that the company through which he was hired has “vanished into thin air.”