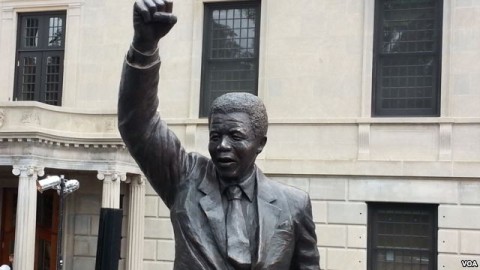 A statue of former South African president Nelson Mandela was unveiled Saturday outside the South African Embassy in Washington, D.C., the site where four protestors were arrested in 1984 — an event credited with spurring anti-apartheid sanctions against South Africa. 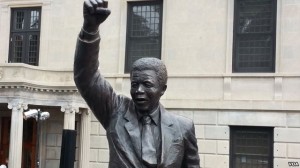 The 3 meter statue, a replica of the sculpture outside the gates of Drakenstein Correctional Centre in South Africa where Mandela was released after 27 years in apartheid-era jails, is the work of South African artist Jean Doyle, who modeled the sculpture from photographs of Mandela leaving the prison in 1990, his fist is raised triumphantly over his head.

Ebrahim Rasool, South Africa’s ambassador to the United States, noted the statue stands across the street from a statue of British Prime Minister Winston Churchill, who is also depicted with his hand over his head but with two fingers raised, flashing the V for victory sign. Suggesting the two statues are engaged in a game of Rock-Paper-Scissors, Rasool noted that “rock beats scissors.”

A plaque at the base of the statue quotes from Mandela’s address to a joint session of Congress months after his release in 1990.

“The stand you took established…that here we have friends…fighters against racism who feel hurt because we are hurt, who seek our success because they too seek the victory of democracy over tyranny. I speak…of the millions of people throughout this great land who stood up and engaged the apartheid system in struggle. Let us keep our arms locked together so that we form a solid phalanx against racism…Let us ensure that justice triumphs without delay.”