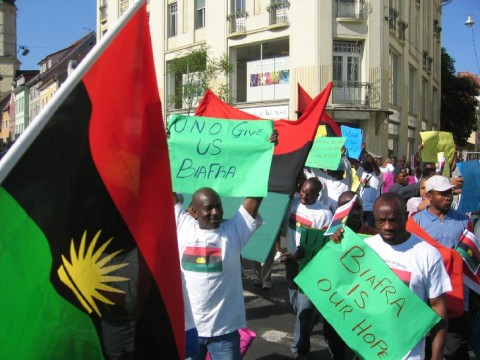 The Movement for the Actualization of Sovereign State of Biafra (MASSOB), has again and for the last time ordered Igbos residing in Boko Haram prone Northern Eastern states, to leave the zone or face its dire consequences.

Leader of the Militia group, Chief Ralph Uwazuruike, handed down the directive Wednesday in his country home – Okwe near Okigwe, Imo State, South Eastern Nigeria, after an emergency meeting with the leadership of the movement.

Uwazuruike, stated the order became necessary so as to avoid further loss of Igbo blood in the North to the alarming rate of bloodletting by the Boko Haram insurgents.

MASSOB leader noted that the proclamation of a prophet was not needed for any Igbo man or woman to know that Nigerian security forces could no longer guarantee his or her safety since the insurgents had not relented in their wicked shedding of blood and cutting short the lives of innocent citizens.

He however contended that every Igbo man or woman had a community in the South-East, stressing that it would be better for them to die in their father land than to be killed by Boko Ha­ram in the North.

He reiterated the commitment of the group to actualize the sovereign state of Biafra through non-violence, vowing that the movement would not be cowed to silence by anybody or group.