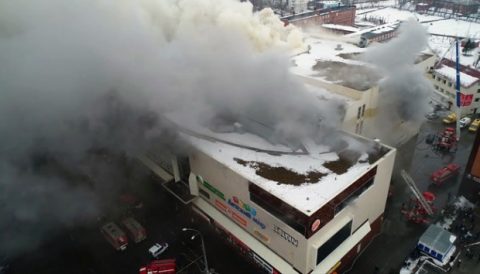 (AFRICAN EXAMINER) – Thousands of protesters have stormed the Siberian city of Kemerovo, to express their dissatisfaction at Russian officials over the Sunday leisure complex fire incident which killed not less than 64, including 41 children.

Reports indicate that relatives no fewer than 85 people were still missing, mostly children.

Investigators’ accounts say the fire alarm was switched off while exits were blocked.

Several protesters rallied outside the local government headquarters on Tuesday, demanding that officials be sacked over the fire safety shortcomings.

On the other hand, anti-Putin chants such as “Putin resign!” were were heard.

The cause of the fire as at Tuesday is not yet known, but Russia’s Investigative Committee alleged “serious violations” at the Winter Cherry mall.

Already, President has declared Wednesday as a day of mourning throughout Russia.

A woman in the Kemerovo crowd drew applause when she said “children called their parents, asked them for help, asked for the fire brigades to be sent in”.

Officials who attempted to disperse the mob were booed.The protest had already lasted seven hours.

In contrary, the Regional Deputy Governor Sergei Tsivilev was was applauded by the crowd when went down on his his knees, begging the protesters for forgiveness.