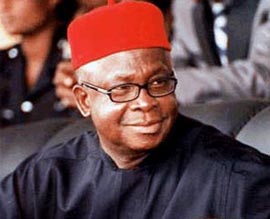 All seems not be well between the Ebonyi state Governor, Mar­tin Nwancho Elechi  and some key politicians in the state, as the former just revoked the chieftaincy titles conferred on the Senator representing the  state’s Central Senatorial district, Chief Paulinus Igwe-Nwagu and ex- Deputy Speaker of the state House of Assembly, Valentine Okike.

The two politicians were said to have been conferred with the titles by the monarch of Ishinkwo community, Eze Jo­sephat Ikegwu, allegedly beyond his jurisdiction.

Elechi, who announced the revocation after a three-hour closed-door meeting with stakeholders in Onicha Local Govern­ment Area of the state Monday in Abakaliki, said the decision also affected other chiefs conferred with titles by traditional rulers, beyond their domains, adding that anyone who remains adamant, would not be recognized.

The Governor also declared that Ukawu community has no traditional ruler, warning that nobody should parade himself as such in the area,  until new monarch is installed.

African Examiner learnt that the throne became vacant following the demise of the traditional ruler of the community. “The traditional ruler went beyond the bounds of his domain to officiate in a different community. Reason for that, we don’t want to go into. Whether it was done by consensus or cabinet members of the late Eze or for some other reasons that is not important, but the right thing should be done. The Governor insisted.

“We think that he should restrict himself to his own domain. So, we do not recognize those acts of coronation of Senator Igwe-Nwagu and former Deputy Speaker, Mr. Okike. We believe all concerned will accept these decisions in good faith as indeed there is no victor, there is no vanquished,” Governor Elechi stressed.