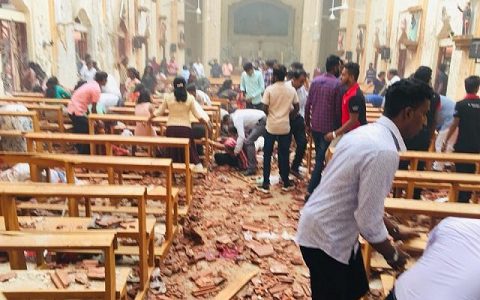 (AFRICAN EXAMINER) – More than 200 people were killed and hundreds more wounded in eight bomb blasts that rocked churches and luxury hotels in or near Sri Lanka’s capital on Easter Sunday — the deadliest violence the South Asian island country has seen since a bloody civil war ended a decade ago.

Defense Minister Ruwan Wijewardena described the bombings as a terrorist attack by religious extremists, and police said 13 suspects were arrested, though there was no immediate claim of responsibility. Wijewardena said most of the blasts were believed to have been suicide attacks.

“People were being dragged out,” said Bhanuka Harischandra, of Colombo, a 24-year-old founder of a tech marketing company who was going to the city’s Shangri-La Hotel for a meeting when it was bombed. “People didn’t know what was going on. It was panic mode.”

He added, “There was blood everywhere.”

Most of those killed were Sri Lankans. But the three hotels and one of the churches, St. Anthony’s Shrine, are frequented by foreign tourists, and Sri Lanka’s Foreign Ministry said the bodies of at least 27 foreigners from a variety of countries were recovered.

The U.S. said “several” Americans were among the dead, while Britain and China said they, too, lost citizens.

Prime Minister Ranil Wickremesinghe said he feared the massacre could trigger instability in Sri Lanka, a country of about 21 million people, and vowed to “vest all necessary powers with the defense forces” to take action against those responsible.