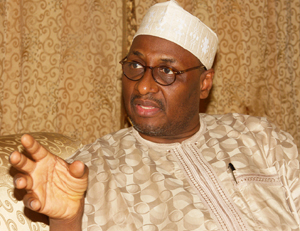 It was a new vista for the PDP as the former two time governor of Bauchi state, Adamu Mu’azu, emerged as the compromise candidate for the chairmanship of the People’s Democratic Party, PDP. It is a whole new ball game for the PDP national chairman, nothing compared to his former position as the chief servant of Bauchi state from 1999 to 2007. The monumental crisis that rocked the ruling party in recent months under the erstwhile chairman, Bamanga Tukur, culminated in the defection of five PDP governors. Mu’azu comes into office to the exigency of the arduous task of party members reconciliation. He mounts the saddle at a time the party is coming to terms with some of the most profound rift the PDP has ever known since its formation. Personal ambition and vested interests for elective positions for next year general elections have turned the ruling party to a battle ground of sorts. The foot soldiers of President Goodluck Jonathan have already set the pace with the verbal warfare it has been embroiled with the opposition party and whoever has expressed any political ambition capable of truncating the second term aspiration of Mr. President. Stemming the tide of defecting members at all levels of the party to the All Progressive Congress will compel the PDP chairman to hit the ground running, particularly as lawmakers in the upper legislative chamber are warming up for what will become another tsunami of defection to hit the party.

The G5 governors have since left the ruling party for the All Progressives Congress (APC) save for the Jigawa state governor, Sule Lamido and his Niger state colleague, Babangida Aliyu, who have continued to sit on the fence after they pulled out of the defection train at the eleventh hour. The replacement of Tukur as PDP chairman was one of their demands. Both governors are also crossed with the PDP national leadership for failure to convince Jonathan to honour the pact he allegedly signed with the north to rule for only one term upon his election as President in 2011. Former military and civilian President, Olusegun Obasanjo, a founding member and one of the national leaders of the party, announced recently that he was withdrawing from party activities because an alleged drug baron was made the South-West leader of the PDP. These and more are part of the sundry issues Mu’azu will seek a quick resolution as chairman of the party.

As he steps into Wadata Plaza headquarters of the PDP, his crisis management skill will be brought to test as everyone connected with the party will be watching closely to see how he will go about the business of reconciliation of members who were caught in the web of Tukur’s high handedness – an overzealous quest to get the applause of the first family at the expense of the party. The new PDP chairman must be wary of undue influence from the Jonathans to put structures in states opposed to the president’s second term agenda.

As we approach 2015, the ambition of President Jonathan to pursue another four-year term in office will continue to generate tension between the presidency and arrowheads of the north’s quest for power return to the zone at all cost. This is one issue that is capable of exposing the fault lines in the party. For Mu’azu, blind loyalty to the presidency even when the party’s interest is at stake is a super highway to sliding further down the slippery slope of the PDP’s descent into crisis.

As chairman, he should gird his loins for the barrage of criticisms from the opposition APC in the broadsides of the politics that will ensue on the pages of newspapers. His inglorious past, particularly his case with the Economic and Financial Crimes Commission, EFCC, for allegedly embezzling N19.8billion during his tenure as Bauchi state governor will continue to be a reference point in the war of words.

The self-acclaimed largest poliitcal party in Africa has gained reputation over the years for recycling politicians with integrity issues. To underscore this point and Jonathan’s hypocrisy in the fight against corruption, in spite of the allegations of misappropriation of Bauchi state funds, Mr President gave his blessing to the appointment of Adamu Mu’azu in 2011 as Chairman of the Board of Nigerian Maritime Administration and Safety Agency (NIMASA). In November 2013, Mu’azu was then appointed as chairman of the Nigerian Pension Commission, PENCOM. It is reprehensible and morally wrong for the president to appoint a man standing trial for corruption to such a high office. The ruling party and indeed the government of Goodluck Jonathan has advertently being encouraging corruption by appointing indicted persons facing investigations into sensitive positions. It is weird to assume Jonathan will ever think of corruption let alone fight it. Mr President is at best, fighting corruption with corruption. It is patently obvious from his antecedents that Jonathan does not only encourage corruption but endorses it.

Another battle of supremacy between incumbent Bauchi governor Isa Yuguda and the new chairman, Adamu Mu’azu might be in the offing, a parallel of the political feud between Murtala Nyako and Bamanga Tukur rivalry that led to the eventual defection of the Adamawa state governor to the APC. Governor Isa Yuguda during the early days of his tenure, set up a committee to probe the former governor on the alleged mismanagement of N19.8billion from the state coffers. Many saw this as a way to get back at Mu’azu for the infamous role he played in working against his candidature in the 2007 elections which made him decamp to the opposition All Nigeria People’s Party, ANPP, on whose platform he won the election. Yuguda only returned to the PDP after he married off one of the daughters of late President Umaru Yar’adua. He capitalised on his new status as son-in-law to the then president and made a triumphant return to the PDP. After his return, the Bauchi PDP was factionalised. A faction was loyal to governor Yuguda and another (better known as “PDP Dubai” at that time) loyal to the former governor, Mu’azu, who was on self-exile to the United Arab Emirates for fear of prosecution. He steered the affairs of PDP in his home state from there. Many still belief there is still some bad blood between the two and it is only a matter of time before the much feared and talked about rivalry for control of party structure between a PDP national chairman and incumbent governor of his state of origin begins.

Now that President Jonathan has failed to install his preferred candidate as PDP chairman the way he had his way with Tukur, what fate lies ahead of his 2015 ambition? Will Adamu Mu’azu, wholeheartedly support the pesky aspiration of the president to run for a second term despite the mounting opposition from the north? What way can Jonathan’s electoral fortune be buttered  considering that Bauchi was one of the states that we saw anti-Jonathan protesters in their numbers leading to the killing of some National Youth Service Corps (NYSC) election officials in 2011. The new PDP chairman was one of the aspirants who jostled to emerge as a northern presidential candidate on the platform of the party before the 2011 elections. So, will Mu’azu sacrifice his ambition and the interest of the North to support the candidature of President Jonathan from the South? These are questions that will determine the trajectory of Adamu Mu’azu’s stewardship because as we have seen in the past, the support of a PDP national chairman cannot be divorced from the ambition of a sitting president seeking a second term.

Theophilus Ilevbare is a public affairs commentator. Engage him on twitter, @tilevbare. He blogs at http://ilevbare.com.