Muma Gee steps out without hubby 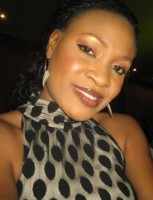 Newly wedded female singer, Peace Uwame popularly known as Muma Gee steps out last weekend without the love of her life to
whom she tied the marriage knot not too long ago.

Trust the Olofofos who pointed my attention to the fact that this pretty entertainer who loves to refer to herself as an ‘Africa Queen’
has attended the event that took place somewhere around GRA in Ikeja without her hubby.

People could not but wonder why she decided to attend the party alone leaving behind her better half.

While some are trying to consider the fact that the poor man may be sick and tired of having to play the role of a lover boy in front of
paparazzi, another school of thought could not but pray that all is well between the newly wedded couple because it’s too early for
‘Katakata’ to burst o!