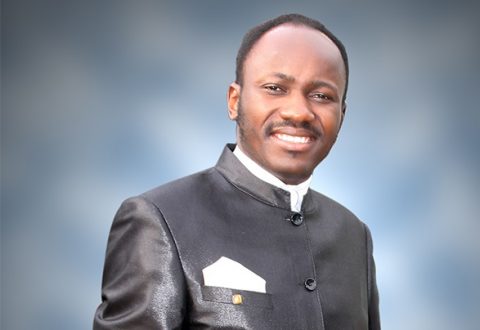 LAGOS, NIGERIA (AFRICAN EXAMINER) – The founder of Omega Fire Ministries, Johnson Suleman, recently instructed members of his church to kill Fulanis. An attempt by operatives of the Department of State Security (DSS) to arrest him in Ado Ekiti on Tuesday was foiled by Governor Ayodele Fayose.

The Muslim Rights Concern (MURIC) has condemned the founder of Omega Fire Ministries, Johnson Suleman, Pastor Johnson Suleman’s over his unguarded statement and the Ekiti State Governor Ayodele Fayose for preventing the Department of State Security (DSS) operatives from carrying out their constitutional duty.

The Cleric recently instructed members of his church to kill Fulanis in retaliation to the killing of fellow faithful, allegedly by the herdsmen.

MURIC according to its Director Prof Ishaq Akintola in a statement issued in Lagos Wednesday noted that for him to have disturbed the arrest of Pastor Suleman, Fayose has ”manifested blatant disregard for the rule of law, encouraged lawlessness and exhibited executive brigandage”.

”Pastor Johnson Suleman wants to make the country unsafe for Muslims and law abiding Fulanis. It is not in our character to issue threats. We are mature enough to control our emotions. Yet it is not out of cowardice that we prefer to tow the path of peaceful coexistence. Muslims have never been known to fear death or to compromise their faith. But we do not want to join issues with belligerent people who are always bullying Muslims and Fulanis by telling lies and issuing threats. Neither do we want to heat up the polity.

”The victims are usually the poor masses who are hypnotized by the rhetoric and mesmerized by the oratorical skills of their fanatical leaders. This is why leaders must weigh every word they utter. Leaders are models. They must live by example and teach their followers to learn how to love, to tolerate, to forgive and to peacefully coexist” Prof Akintola cautioned.

Consequently, the group charged Nigerians to objectively and critically examine the Fulani herdsmen phenomenon, urging ”they should not allow some misguided spiritual leaders who have hidden agenda to becloud their sense of assessment”.

MURIC recalled that Fulanis have been coming to Nigeria before the 1914 amalgamation, saying that their nomadic and pastoral flow has never waned since the first Fulanis came from Futa Toro in Senegal in the 11th century. It noted that the public should not be surprised that the criminal elements among the herdsmen are not Nigerians, alleging some of them are Senegalese and Malians.

”It is therefore unwise of us as Nigerians to allow a few lawless foreigners to cause religious or ethnic war in our land. Let us separate criminals from their tribe or religion. We should resist the temptation to stigmatise Fulanis or Muslims because a few herdsmen take the law into their hands. For the avoidance of doubts, we denounce the criminal activities of these herdsmen but we should mind where we point accusing fingers.

”Are Nigerians unaware that the same Fulani herdsmen have are also been attacking and killing Muslims in Zamfara, Niger, Kano, Bauchi and other Northern states? Why have we been ignoring this angle if we are sincere? Has the status of a herdsman changed when he attacks a Northern farmer or a Muslim and steals his cattle?  Let us be objective. Let us stop criminalizing Fulanis and demonizing Muslims. It is the height of hypocrisy and absolute lack of patriotism to give the criminal activities a religious or ethnic colouration” MURIC challenged.

Prof Akintola called on the Nigerian security agencies to do the needful, contending that ”Nobody is above the law. Fayose or no Fayose, Pastor Johnson Suleman must still be questioned and cautioned for his vituperations and provocative statements. He cannot remain tied to Fayose’s apron string forever.

”Even Fayose should be told point blank that his days as a free man are numbered. He must answer for his executive rascality and lawlessness. No governor in the history of Nigeria has abused his office like Fayose has done. His cup of executive recklessness has been filled to the brim. The people of Ekiti State have indeed entered a ‘one chance’ bus. Or what do we say about a state governor who is seldom sober? We do not need a micro-biologist to tell us whether or not Fayose has the ‘area boy’ syndrome virus.

”We charge the Nigerian security agencies to spare no effort in dealing decisively with the notorious herdsmen who have brought untold hardship to Nigerian farmers. The full wrath of the law must be unleashed on them for killing innocent farmers and destroying their farms. We appeal to Muslims to go about their lawful duties and to remain calm and law abiding. We invite religious leaders to douse tension in their areas of influence in order to allow peace to reign” MURIC said.

The group also reminded the United Nations Organization, the European Union and the African Union to take note of the hate speeches emanating from Nigeria and their authors for the day when ”the come will come to become.”