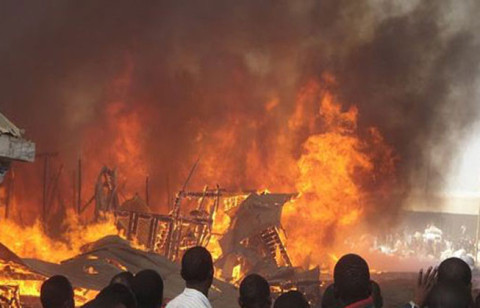 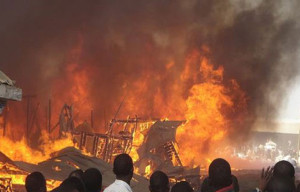 Victims of last Wednesdays mysterious fire that occurred at commercial shops located at No 20 Park road, Aba, destroying goods valued several million of naira, have sent a save our soul (SOS) message to the state government.

African Examiner gathered that the source of the fire which consumed many shops was yet to be ascertained as the area has been without Public power in the past one week.

A resident of the area who preferred anonymity said the inferno would have spread to nearby buildings if not for the timely intervention of men of the state Fire.

One of the victims, Mr. Ogbonna Ukwuije, applauded efforts of the men of the Fire service, though, saying he cannot quantify what he lost to the inferno.

He said  more than 20 buildings would have been consumed in the incident if not for their quick intervention of the fire men.

“My phone rang around 2am in the morning that my shop was on fire. I rushed down to the place only to see that all I have labored for in my life has gone up in flames.

“I sell and repair air-conditioners, and refrigerators, not even a pin was salvaged.

“Everything was gone. I’m calling on the state government to equip the fire service people because if they had more than one engine, they would have stopped the fire from doing much damage, because by the time they refilled and came back, the damage had already been done”.

“I thank God; they succeeded in stopping it from spreading to nearby buildings. ”

Another victim, Mr. Okechukwu Nwakaozo, who also lost refrigerators, freezers and air-conditioners to the fire disaster, appealed to government authorities and public spirited individuals to assist him reduce the effect of the loss on him.

Speaking with newsmen on the incident later, Mr. Victor Gbaruko, Director, Abia state Fire Service, said his men noticed the fire from their office and were able to stop it from spreading to adjoining buildings before they went to refill.

He stated that lack of a back up fire engine has continued to affect their operations.

“When we came, only two shops were on fire, before we refilled and came back, the whole building has been consumed.

“If we have a back up, no fire will overwhelm my men, I tell you we cannot lose any building to fire incident no matter the strength. Our problem is that by the time we get back to the station to refill and refill, the fire would have wrecked more havoc.”

Mr. Gbaruko however, advised residents to ensure that their electric appliances are always switched off when not in use.

“People must ensure they remove all appliances when they are not in use. Even when there is no electric supply, it is dangerous to leave the switches working. There are fake wires everywhere. We are talking of adding 8000 megawatts to the national grid.

“If we don’t have constant electricity now and this is happening, what do you think will be the situation when electricity becomes constant? Everybody must be safety conscious.,” he advised.