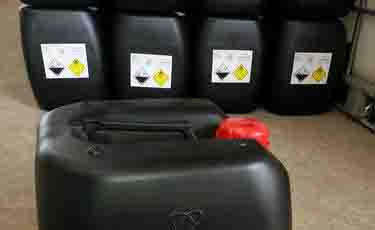 No fewer than 10 people were on Thursday bathed with raw acid in Mgbakwu community, in Awka North Local Government Area of Anambra state by one Uche Nnabuchi, following quarrels that ensued over N15,000 debt.

Our correspondent gathered that trouble started when youths of the community had on the said day sent delegates to the home of  Nnabuchi, to summon him over the said debt he was owing a woman in the community.

Spokesman for the youths, Mr. Onochie Nzekwe, told newsmen that “the ugly incident occurred when some persons went as a group to invite the man over a N15, 000 debt he owed a woman”.

According to him,” the man, Mr. Uche Nnabuchi, who was to appear before the group to explain why he refused to pay the debt, decided to attack them”.

Nzekwe stated that the youths were only working to ensure peace and love for the development of the community.

But  Nnabuchi denied pouring acid on the victims intentionally, saying it was meant for his car.  He also debunk claim that he was owning the woman N15,000, saying the real amount he is indebted to her is N6,000, adding that the incident of the acid was not intentional.

When contacted for his reaction, the state Police Public Relations Officer (PPRO), Mr Emeka Chukwuemeka, who confirmed the incident in Awka said the police had commenced full investigation into the matter