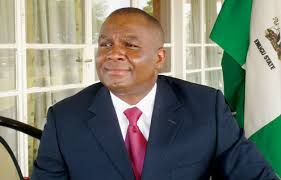 Consequently, Justice Obiozor rejected the explanation by Nnamani’s Counsel, Mr. Abubakar Shamsudeen that his client was presently bedridden in a US hospital and was recuperating after a heart surgery.

Similarly, he declined the prayer for an adjournment till January 2018. He complained that the trial has been on for 10 years, whereas, the judiciary has been blamed by many for the slow pace of the cases of such.

“This matter was slated for re-arraignment today, and I have not found any justification for the absence of the accused before this court to take their pleas.

“There must be an end to litigation; the charge before me was filled in 2007 and it is now 10 years.

“In the peculiar circumstances of this case, and particularly in the absence of any convincing explanation on the absence of the defendants before this court today, it is hereby ordered that a bench warrant be issued against the first and second defendants as well as a summons for the sureties to show cause” Justice Obiozor ruled.

He subsequently adjourned the hearing till December 14, 2017.