Naked Women Protest Against Detention Of Community Leader In Ebonyi 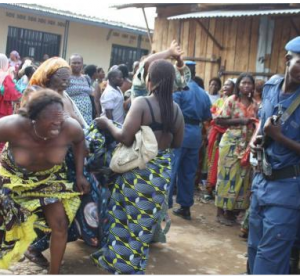 EBONYI, NIGERIA (AFRICAN EAXMINER) – The entire Nkwegu community near Abakaliki, the Ebonyi State capital was on Monday thrown into pandemonium, as no fewer than 200 naked women from Afikpo-South council Area of the state staged a protest over the alleged continued detention of the President General of the community, Mr. Ndubuisi Ekumankama, by the police.

It would be recalled that the community leader was recently arrested for allegedly demolishing a widow’s house in Amangwu Edda community of the State.

The naked women were on their way to the Ebonyi State Government House, Abakaliki, before they were intercepted by policemen at Nkwegu, near a military cantonment.

Security men who intercepted them were however confused on how to handle the situation.

The protesting women, were half naked up to the upper regions of their body.

An eye witness who did not want to be quoted in print said some policemen fled the scene of the protest because of the traditional belief in the area, that any body who attempt to stop naked protesting women would be strike by the ancestors.

It took the intervention of Ebonyi State Police Commissioner, Ibekwe Abdallah, to manage the situation, as he dispatched a team of policewomen to the scene of the protest.

The State Police Public Relations Officer (PPRO), George Okafor, who confirmed the strange incident to newsmen on Tuesday, described the action as “shameful and a desecration of the Igbo culture”.

According to Okafor, the women had planned the protest last week but were advised to seek legal redress as the President- General, who was arrested by the police, had been charged to court.

The Command spokesman narrated: “Last week, a group of women numbering about 20 stormed the police headquarters to protest the arrest and detention of a suspect who was being held for demolishing a widow’s house in Amangwu-Edda.

“Today, we got information that the same women had gone and mobilised over 200 other women to storm the Government House in protest.

“We also got information that they were coming into the town naked so, we tried to halt them from gaining entry into the city.

“Our men who earlier got to the scene were repelled because of the sight of the nakedness of these women and we had to mobilise our policewomen, led by a female Assistant Commissioner of Police.

“Their action was unfortunate and shameful.” the PPRO declared.

Okafor added that the Policewomen were able to put the situation under control without any casualty, stressing that two suspects arrested for demolishing the widow’s house have been charged to court.