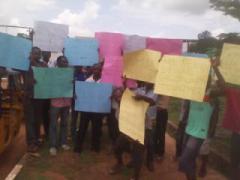 Commercial and social activities were grounded on Tuesday in Enugu metropolis, as scores of tricycle operators popularly referred to as ‘Keke NAPEP‘ took to the streets, protesting against imposition of multiple taxation by the state government and police extortion.

Speaking to the news men in front of the State House of Assembly gate, leader of the operators, Mr Simon Odoh, explained the union members were being exploited unduly by the authorities of the three council namely, Enugu East, North, and South areas in Enugu city.

He snaped they were compelled to pay for emblems, tickets, Eswama buckets, among other levies, by the three local authorities.

He complained that since the introduction of tricycle in the state, their members had always been humiliated and subjected to all manners of harassment, in the name of revenue drive.

Odoh lamented that the experience has been harrowing as most members operate on the basis of higher purchase, adding that most of the revenue collectors were touts hence uncivilized.

The operators argued that tickets of N200 obtained at any designated point of the metropolis, was supposed to cover every part of the city provided evidence of payment is presented, ” except if the operator decides to limit his scope of  operation for a day to only one council area.”

The ugly development the union leader disclosed has also led to many of their machines being impounded by members of the councils’ task force, noting that the multiple taxation imposed on them included annual renewal of emblems of the three council areas which ranges between N1, 500 per council area, payment of ESWAMA bills which initially was pegged at N500 per driver but now increased to N1, 500, beside other alleged illegal levies.

Some of the placards displayed by the protesters read: ‘Keke NAPEP drivers want a stop to multiple taxation’, ‘Governor Chime should come to our rescue’ amongst others.