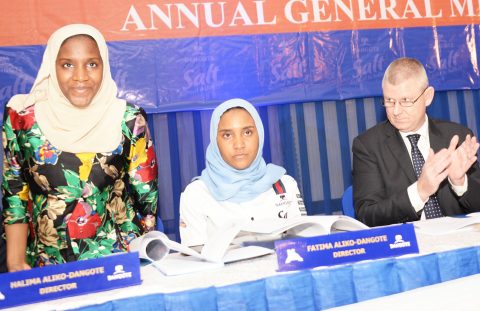 (AFRICAN EXAMINER) – Executive Director Commercial of NASCON Allied Industries Plc, Fatima Aliko Dangote has expressed delight at the expected significant increase in both turnover and profitability of the company, as a result of the proposed new products, to be released to the market before the end of this year.

In a chat with select media men on Tuesday, Fatima said the arrangements for the launch of new products have been concluded and once introduced into the market, both the turnover and profits of the company will witness a significant increase.

According to her: “We are bringing other products that are going to be launched this year. So, hopefully, 2017 will be a better year. We will record a significant increase in both the revenue and profitability as a result of the new products and this will be very good for our shareholders.”

She further assured that the company will “try as much as possible to perform a lot better than we did in 2016. Obviously the shareholders are aware that we are having some challenges from sourcing materials for some of our products locally, but we are going to try as much as possible to do a lot better. We are investing so much in other things that we are presently doing at the moment, we are expanding, we are investing on new refinery for our salt and we are also looking at innovations…We placed shareholders interest so high cos they have actually trusted us, they have invested in our business and as you can see, regardless of our challenges, we are still able to push really hard and declare profits. we have to take our shareholders very importantly so that they can keep trusting us, and more people will keep buying our shares and hold us in high regards”

The company recorded a turnover of N18.29 billion, representing a 13 per cent increase over the N16.18 billion in the previous year. Profit after tax increased by 15 per cent from N2.11 billion in 2015 to N2.42 billion, while earnings per share also increased from 79 kobo to 91 kobo. As a sign of stability, the company has N2.45 billion in cash reserves for the year under review.

Recalled that the Chairperson of the company, Yemisi Ayeni at the Annual General Meeting (AGM), held last week said for the company to increase market share and improve efficiency, it will be “investing in Salt packaging and seasoning cubing lines”.  For the year under review, she said while the revenue from the sales of salt increased by 24 per cent to N14.82 billion, sales from seasoning increased by 127 per cent to N0.54 billion.