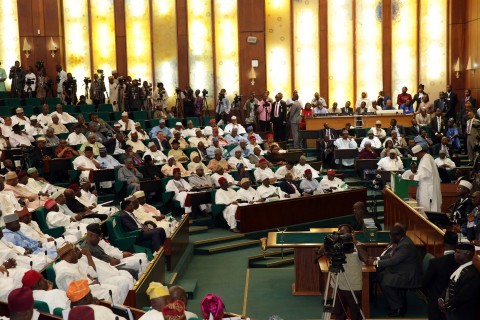 (AFRICAN EXAMINER) – The All Progressives Congress (APC) has re-emphasised that the National Assembly should reconvene immediately to attend to crucial and pending legislative business.

The party, in a statement by its National Publicity Secretary, Mr Yekini Nabena on Tuesday in Abuja, said that the majority must be allowed to lead the Senate.

“We are in a democracy and are governed by laws. A few cannot hold the legislative arm of government to ransom through their selfish political games.

“The National Assembly must be reconvened immediately to attend to crucial and pending legislative business. The majority must be allowed to lead,”he said.

He, however, condemned an alleged statement by the Coalition of United Political Parties which that APC-led administration planned to attack the National Assembly leadership and abuse court processes.

Nabena said such crude practices were rejected templates of the opposition Peoples Democratic Party (PDP) which the so-called coalition represented and alien to the progressive APC-led administration.

He added that the APC considered the new rounds of falsehood by the sponsored coalition as a last-ditch attempt by the outgoing and minority National Assembly leadership of the President of the Senate,Dr Bukola Saraki, his Deputy, Ike Ekweremadu and Speaker, House of Representatives, Yakubu Dogara.

He added that their plans were to prevent the reconvening of the National Assembly and continue a minority rule in an APC-dominated federal legislature. (NAN)