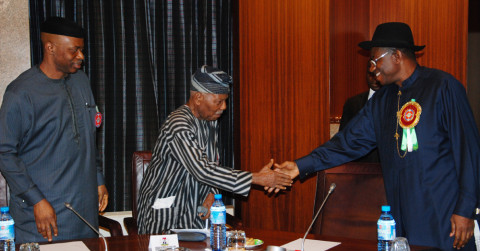 The Yoruba socio-cultural group, Afenifere has told Federal government that the proposed national conference is more important than the 2015 general elections. 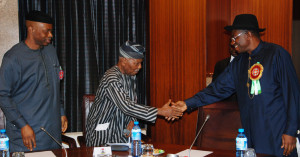 Afenifere leader, Chief Reuben Fasoranti, disclosed during a courtesy call on the President at the state House in Abuja that the Yoruba nation remained committed to his administration if only the president will allow the conference fulfills its purpose.

According to Fasoranti, “The visit is quite historic for us as our immortal leader, Chief Obafemi Awolowo’s prophesy was fulfilled in our very eyes: The sage in the course of his electioneering campaign in Bonny, the old Rivers state in 1983 made a clairvoyant declaration; “an Ijaw man will be president before long.

“The prophecy flowed from Awo’s long time commitment to the cause of the minorities in Nigeria. Without mincing words, Chief Obafemi Awolowo’s and Afenifere that he led more than any one or group did more to put the monority question on the front burner of political activities in Nigeria.

“Till date, we his disciples, still stand by the principled position that minorities must never be relegated to the background and their participation in governance, including the highest office in the land, should be of right and not patronage.”

Speaking on other matters, Afenifere leader noted that the state of emergency declared in three states of the northern of the country was a step in the right direction.

He continued: “However, we do not want you to see the insurgency we are currently battling as an isolated event. It must be seen within the web of orchestrated challenges of a country that has been unable to achieve nationhood because of its foundation.

“The errors we have failed to rectify have now become a terror unto us. At every turn, they stare us in the face that this country cannot work as presently structured, but unfortunately, we continue to pretend about it,” it said.

Afenifere stressed the need for the national conference to hold saying: “This is the reason why we have insisted all these years that Nigeria must be restructured at a National Conference so we can enunciate sound federal principles that would allow us to live together in the same  country on the basis of mutual respect and freedom for all the component units to exist in their cultural habitats without injuring one another.

“Mr. President, Nigeria will be 100 years next year. Its future as a united entity is threatened if we failed to have a National Conference. We must have one in order to secure this country and make it fulfill its manifest destiny.

“Examples abound around the world of countries like USSR, Yugoslavia et al that have disintegrated in recent years because they failed to address vexed issues in their union. No genuine patriot would wish that Nigeria ever go down such way.

“That is why we commend your initiative on a National Dialogue to bring together the peoples of Nigeria to discuss their union. This is a bold move that will earn you a good place in history if faithfully implemented. Any leader who is able to get us out of this structural quagmire will never be forgotten.

“Mr. President some forces that have benefited from the imbalance and inequity of decades would not fold their arms and watch Nigeria restructured into an entity that works for all its component units. This is why all manners of ‘letters’ were posted to you with ‘impeachment’ calls. Expect more of that as the process moves on by those who want the National Dialogue aborted.

“Sir Afenifere considers the National Conference as the soul of a new Nigeria and as such much more important as anything in the polity, 2015 election inclusive. That is why we are strongly advising that the conference be concluded early so that the 2015 elections can be conducted on the basis of the new constitution.

“Finally we urge you to be more vigilant and rest assured of Afenifere’s support in the days ahead for as long as you are committed to give Nigeria a proper National Conference which you re-emphasised when you received the report of the Advisory Committee two days ago.

“We believe the time has come for us to sit and find lasting solutions from the stakeholders across Nigeria to our challenges as against temporary reliefs that bring greater and long-lasting sorrows which some letter writers and their group have given us since 1966,” it said.

The group however appealed to the President to look into the problems afflicting privatized Federal Government companies in the South-West including Machine Tools and Steel Rolling Mills in Osogbo, with a view to making them operational.

In his reaction, President Goodluck Jonathan, assured Nigerians that his administration would allow the people to decide the result of the upcoming National Conference.

Jonathan told the Yoruba elders in the closed-door meeting that he had no personal interest in the outcome of the meeting and would therefore stay away from the proceedings.

Meanwhile, the chieftains of the Afenifere present at the meeting were Chief Olanihun Ajayi, Governor Olusegun Mimiko of Ondo State, Senator Iyiola Omisore, Chief Supo Sonibare, Yinka Odumakin among others.