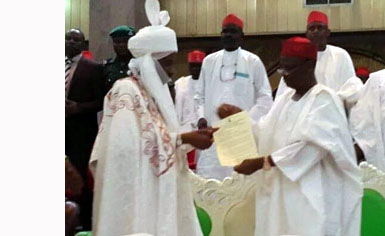 The newly installed Emir of Kano, HRH, Sanusi Lamido Sanusi has received official appointment letter at his coronation ceremonies which held in the Africa Hall, Kano State Government House, Kano. The 14th Emir Sanusi was announced on Monday, as the successor to the immediate past Monarchy, late Ado Bayero.

African Examiner learnt that the ceremony was attended by the state Governor, Rabiu Kwankwaso, his cabinet members, the Emir’s friends, including Mallam Nasir El-Rufai, APC chieftains in the region and many more.

After the Madaki’s address, Governor Kwankwanso, in his opening speech in local dialect in line with over 200 years tradition lamented about the “politicization” of the selection process, and maintained that the appointment was not politically motivated. He said noted “The appointment of an emir is not a political issue. It is unfortunate that some enemies of Kano State attempted to politicize this process”.

The Governor spoke further, “Sanusi Lamido Sanusi was not only on the recommended list of the kingmakers, but was on top of the list.”

Kwankwanso promised a befitting relocation of the late Emir’s family. According to the Governor, “The Kano State Government has built a befitting building for the large family of the late emir in Sharada. The keys will be handed over today to the family to move in.”