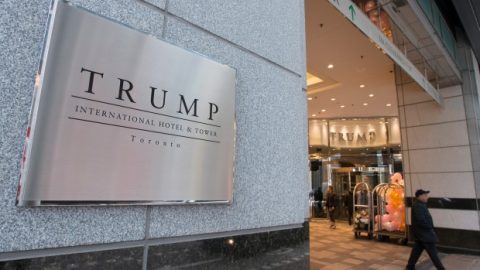 The new owner of the Trump Hotel and Tower in Toronto has reached an agreement to remove the US president’s name from the property.

JCF Capital ULC announced on Tuesday a deal with Trump Hotels to buy out its management contracts for the hotel.

The amount of the deal was not disclosed. There is no confirmed date for the signage’s removal from the property.

The hotel in downtown Toronto opened under the Trump brand in 2012.

In March, JCF Capital acquired the property, which includes 211 hotel units, 74 residential units and most of the commercial, retail and amenity space, through a court-approved sales process.

The firm did not say if it had reached a deal with another group, but a spokeswoman said they hoped to have something announced “in short order”.

The Trump Organization does not have an ownership stake in the building, but it operated and managed the hotel and licensed the Trump name to the complex for a fee.

In a news release, representatives for both Trump Towers and JCF Capital ULC praised the deal.

The project in the city’s financial district was developed by Talon International Inc and has been beset by legal troubles for years./BBC