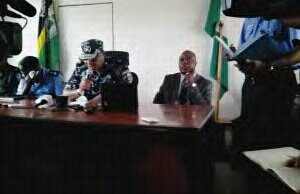 The CP on his resumption Thursday had convened a meeting with top officers of the command where he expressed his readiness to take police in the state to the next level.

Ogunshakin who also briefed the media shortly after paying a courtesy visit on Governor Rotimi Amaechi, appealed to the ranks and file of the police in the state to continue to maintain utmost discipline.

The Commissioner encouraged them to be committed to their responsibilities, saying he would build on the legacies of the immediate past controversial CP, Joseph Mbu, by reducing level of crimes in the state.

He also called for the cooperation of other sister security agencies in the state.

Ogunshakin, warned that he would not tolerate any form of breakdown of law and order in the state adding that any group interested in holding political rallies should do so within the ambits of the law by applying to the command for permit.

The Rivers Police helmsman added that five days notice should always be given to the police before any rally is held in the state.

He also expressed his readiness to partner with various communities, stakeholders and institutions in the state, with a view to ensuring true professional policing in the state.

While advising hoodlums to desist from every criminal activity in the state, the CP, vowed to clamp down on any form of criminality in the area, just as he promised to make professionalism his watch word, while discharging his duties.