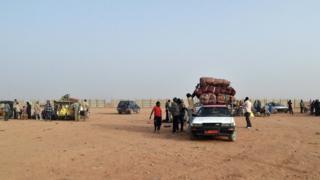 Troops in northern Niger have rescued nearly 100 migrants who were on the brink of death in the Sahara Desert, an army statement has said.

Traffickers abandoned the group, which included women and children, without water and food, it added.

One child is reported to have died, but there is no confirmation of this.

The route from Niger to Libya is one of the main ways migrants reach North Africa before crossing the Mediterranean Sea to get to Europe.

However, the journey through the desert is perilous as the migrants are crammed into pick-up trucks and have little food or water.

The rescued migrants were being looked after by the International Organisation for Migration in the garrison town of Dirkou in northern Niger.

“[The smugglers] tell them that if they do not have money, they cannot continue. So they are in a very vulnerable situation… And if they have no money or sometimes to avoid controls, migrants are abandoned and stay where they are,” IOM head of mission Giusseppe Lopreta was quoted by French publication Jean Afrique as saying.

He added that the migrants – most of whom were from Nigeria, Senegal and Burkina Faso – were saved because they were abandoned near a well/BBC