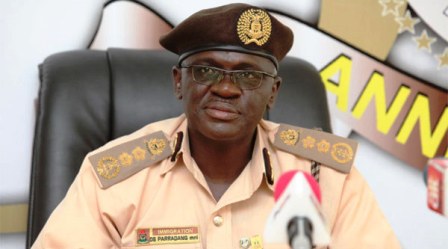 The Nigeria Immigration Service (NIS) Delta State command on Wednesday disclosed that it has arrested over 4,000 suspected illegal immigrants.

NIS was assisted by other security forces, including the police in the mopping up of illegal aliens in the operation which begun last week in Asaba, the state Capital.

Delta state public Relations officer PRO of the service, Mr. Victor Okechukwu, who gave the information, claimed, “so far about 4,000 illegal aliens have been arrested since last week.

He stated that the suspects were currently being screened, adding that those found to be illegal immigrants would be repatriated while the genuine ones and Nigerians among them would be released.

Mr. Okechukwu said the exercise was ongoing as it would be extended to other local government areas of the state.

African Examiner recalled that the state Governor, Dr. Emmanuel Uduaghan had on 2014 May Day celebration raised the alarm that strange visitors had virtually taken over the state and that they inhabited in uncompleted buildings, do menial jobs and some of them employed as house helps.

According to the governor, aside the issue of Fulani herdsmen attack on farmers in the state being addressed, the state government would not close its eyes and watch strange elements taking over the state, adding that he had directed the Immigration Service in the Delta to deal with the issue of illegal immigrants.

However, our correspondent gathered that the ongoing operation “illegal aliens must leave Delta” embarked by the NIS, was born out of the recent alarm raised by the governor.