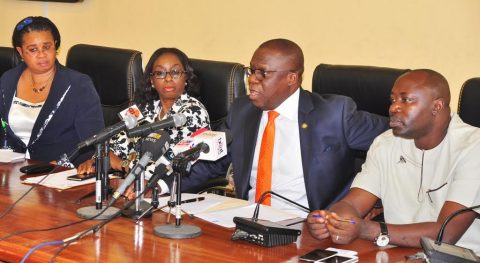 LAGOS, NIGERIA (AFRICAN EXAMINER) – The Lagos State Government has given assurance that its first DNA Forensic Centre to be established in Nigeria will become operational by the first quarter of 2017.

The State Attorney General (AG) and Commissioner for Justice, Mr Adeniji Kazeem while giving update on the project, expressed hope that the centre would go a long way in bringing about seamless administration of justice.

Speaking at the maiden edition of annual Lagos Forensic Symposium held in Ikeja the State capital, Mr. Kazeem said meticulous process were being put in place in partnership with international renowned experts in forensic science to ensure that the centre, upon completion, ‘’is comparable to the best in the world’’.

Kazeem added that the symposium, which was put together by the State’s Ministry of Justice and ITSI-Biosciences, Johnstown, PA, United States, was part of measures to sensitize key stakeholders in the justice administration system with the view to adequately prepare them for the new technology coming on board.

He recalled since inception, the present administration under Governor Akinwunmi Ambode had made law, order and security as one of the major focal points of his government, especially with the procurement of multi-billion naira equipment for the police and other security agencies.

The Attorney-General stated further that, in order to ensure proper investigation and prosecution of crimes, the Governor had approved the establishment of the DNA Forensic Centre, stressing that the Centre would be of international standard and the first by any State Government in Nigeria.

“What this means is that crimes will be resolved faster; there would be more potent and precise investigation by the police and the situation where people are wrongly accused and convicted will be eliminated while the perpetrators would easily be identified and prosecuted. This is good for Nigeria, it is good for Lagos and it shows that Lagos is a leader and will continue to be a leader in innovation and technology’’, the State AG added.

While expressing excitement at the introduction of science and technology to the investigative and judicial process in the State, Kazeem said the development will energize the criminal justice system to fight all forms of criminality including sexual and gender based crimes.

Lead discussant at the symposium and President of ITSI-Biosciences, Dr. Richard Somiari said the State would benefit a lot from the Centre, adding that with forensic capabilities, crimes would be resolved faster, and so many cases which hitherto could not be resolved would be addressed faster.

On his part, Chairman of Ikeja Branch of the Nigerian Bar Association (NBA), Mr. Dele Oloke, said the establishment of DNA Centre was an eloquent confirmation that Lagos is being governed by deep thinkers and vibrant people, noting that the centre would also help in reducing incidences of innocent people being unduly punished, thereby reducing cases of awaiting trial inmates in prisons.