Nigerian Woman Killed in US by Her Room Mate 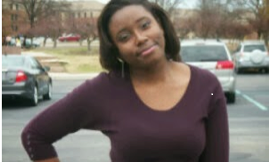 The body of 26-year-old Adaobi Michaella Obih was found on Tuesday November 19th at an apartment at Riverstone Apartments in Columbus, Indiana. Her death is being investigated as a homicide.

A spokesman for the Columbus Police Department said her neighbour, 36-year-old Ryan Allen Klug, who lives in the same apartment complex, is a person of interest in the case.

Klug has gone missing since Adaobi’s body was found.

The Columbus Police have not revealed how and why Adaobi was killed but they are currently seeking the public’s help in locating Ryan Klug.

Adaobi was the first of two children and was already pursuing her PHD in Electrical Engineering at just 26 years old.

Klug may be driving a silver or grey 2008 Subaru Legacy with an Indiana registration plate of 357BPC.

The Columbus Police Department can be reached on 812-376-2600 in case anyone knows where the suspect is.