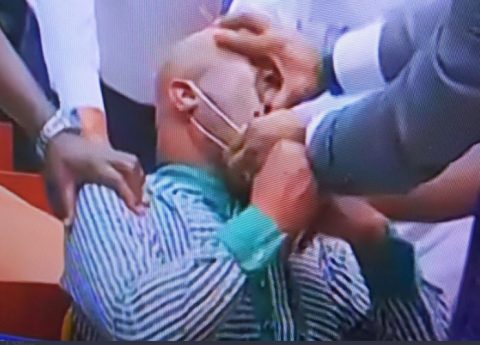 (AFRICAN EXAMINER) – Nigerians on Twitter have reacted to the news of the acting MD of Niger Delta Development Commission, Daniel Pondei, fainting during interrogation by the National Assembly.

It will be recalled that the House of Representative had set up a committee to look into the case of misappropriation of funds at the agency which Pondei heads.

The House committee had requested Pondei to submit 41 documents but he only submitted four.

However, the video where the Acting MD fainted has since surfaced online and Nigerians on Twitter are having a swell time, mocking Mr Pondei. Here are some of the tweets.

Mercy Meekie@MeekieMercy writes: “NDDC MD slumps under intense interrogation. Why does “Sickness” always strike them when it is time to account for their roles in corruption?”

CHIGOZIE@gozie_victor writes: “This NDDC MD is truly an Actor!!

“We need to feature some of these govt officials in Nollywood movies from time to time.”

Uche Samuel@uchesame writes: “Nigerians are you not entertained? This is the kind of content we signed up for. Acting NDDC MD collapsed today while answering questions from the investigative panel.”

Republic of Tacha@RepublicofTacha writes: “Thought #HouseOfTacha was showing on Channels Tv but only to see #NDDCProbe & Acting MD of NDDC Pondei playing Dino. Capture every moment with OPPO.”

Tosin Olugbenga@TosinOlugbenga writes: “When they were embezzling billions on Naira meant for the development of Niger Delta, they didn’t slump. Now they are asking them to provide answers to why they stole the money, they are faking slumping/fainting. 1.3 billion stolen in the name of palliative #NDDCProbe.”

Mr. Alabi of Lagos @the_Lawrenz writes: “You wash that hand before you chook am for my mouth ?” #NDDCProbe.”

Kelvin Odanz@MrOdanz writes: “Last week, the acting MD of NDDC, Prof. Pondei walked out on the house committee investigating the NDDC. He said the chairman,Hon. Olubunmi Tunji-Ojo is an interested party in the scandal,with past allegations against him. This morning Hon. Olubunmi recused himself. #NDDCProbe.”

National Patriot@TobbiMatthew writes: “Listen to Kolawole Johnson, he gave convincing evidence that the money meant for students on scholarships in various tertiary schools were shared by officials, enriching themselves. Students are stranded but they don’t care. Lord have mercy #NDDCProbe.”

Kenny Command@Kheny_B writes: “This should make we the southerners realise that the problem of the south has nothing to do with the Northerners. We’re our own problem. Akpabio, and this bastard that fainted are southerners ooo… What are we doing about this?”

African Examiner reports that the House committee also grilled the Minister of Niger Delta, Godswill Akpabio concerning the allegation of misappropriation of fund in the ministry as well as NDDC.