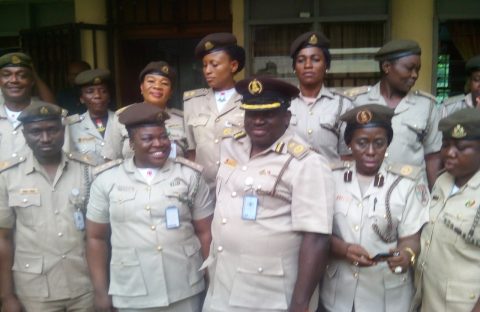 (AFRICAN EXAMINER)- A total of 35 newly promoted officers of Nigeria Immigration Service (NIS), Enugu State Command were on Tuesday decorated with their new ranks, with a charge on them to be Ambassadors of the establishment.

Addressing the newly promoted officers shortly after their decoration at the state command office of the service, Acting Comptroller of NIS in the  State, Mr
Paul Enokela, stressed  that the elevation was based on hard work, diligence and efficiency in service delivery to members of the public.

He, therefore, urged them to continue to be patriot and good ambassador of the service in their respective duty posts, adding that they should equally redouble their efforts and commitment to their respective assignments.

According to him, “You must shun all act capable of tarnishing the good image of the service. On behalf of the Comptroller General (C-G) of Nigeria Immigration Service, Mr Muhammad Babandede, I congratulate you for your promotion to higher rank and higher responsibility.

The Acting Comptroller, who was assisted by some senior officers of the Command, said “put it at the back of your mind that to whom more is given; more is expected. So, the C-G expects you people to redouble your efforts and dedication to the service.

“Accept your promotion as an act of God; since promotion comes from God alone”, warning the promoted personnel to always have at the back of their minds that the NIS has zero tolerance for corruption and other forms of misconduct.

Enokela, expressed appreciation to the (C-G) of the Service  for the number of personnel who benefitted from the gesture, in the command, assuring that
its officers and men  would continue to be exemplary in the discharge of their
duty.

He said the C-G has promised that the next promotion will be announced soon, saying ” those who are not promoted today might get theirs tomorrow, there is no need to despair.

Responding, on behalf of others, newly elevated Assistant Comptroller of Immigration, Mrs Esther Josiah, had thanked the C-G and state  Enugu state Command for deeming it fit for them to be elevated to their respective new ranks.

She however, assured the leadership of the NIS, both at state and headquarters of their dedication and “full commitment towards achieving the mandate of the service.

“I want to assure the entire NIS and our overall boss, the C-G Immigration, that we will continue to work hard, dedicated and pray so that the service will attain greater glory,

Our Correspondent who covered the event reports that the elevation cuts across various departments of the Command.

A breakdown of the promotion list indicates that one of  the  beneficiaries, Mrs. Josiah, was elevated from Chief Superintendent  to Assistant Comptroller of Immigration, while the Command’s public Relation officer PRO, Mrs. Ogadimma Angel Chibuzor, was promoted from Assistant Superintendent to Deputy Superintendent of NIS, among others.