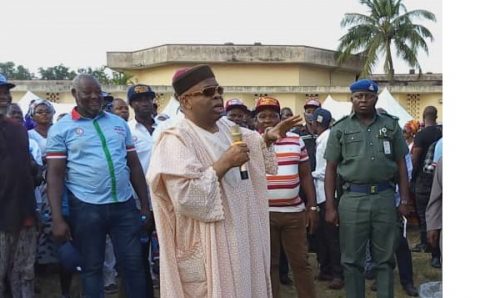 (AFRICAN EXAMINER) – Ex- president of the Nigerian senate, Chief Ken Nnamani and former governor of old Anambra state Dr. Jim Nwobodo, have vowed to resist any attempt by the Peoples Democratic party PDP to  impose erstwhile governor of the state, Dr. Chimaroke Nnamani, by proxy as candidate of the party for Enugu east senatorial district in the 2019 general election.

Speaking Monday during the official flag off of the campaign of the All progressive congress APC candidate for the district, Prince Lawrence Eze, in Enugu, Senator Nnamani, said the action of the PDP is a clear violation of the electoral act and nation’s constitution, and capable of  sending  those involved to prison.

African Examiner recalled that Ex- governor Nnamani, who is currently residing in the United state of  America US, was declared winner of the recent  controversial PDP primary election, which the incumbent senator representing the zone , Gilbert Nnaji is presently  challenging in court over alleged manipulation.

The erstwhile Senate president, who is a chieftain of the APC in Enugu state,  wondered how someone who is in America could be declared winner of an election he did not participate in, adding that “Chimaroke Nnamani did not swear affidavit because such sensitive document cannot be swore by proxy, yet some people went behind to declare him winner of the PDP. primary.

“I know that there is no law in our land authorising someone to swear affidavit for another person, am saying this because those who perpetrated this fraud may be matching to the prison.

“This action shows that the PDP impunity is still rearing its ugly head in Enugu East senatorial zone. Our political process in the country as well as the zone are on trial. We are going to resist this undemocratic act, because am an interested party in the matter.” he stated.

“We cannot have a senator by proxy, warning that if not properly handled, the development is capable of igniting political crisis in the senatorial district.

“I’m yet to know why PDP chose to commit such high level of impunity in my own senatorial district.As much as we know,Chimaroke was not seen anywhere. He is still outside the country in his sick bed. Even if somebody filled the forms for him in proxy. The electoral law demands he must swore the court affidavits by himself the conspirators might go to prison.

Chief Nwobodo, in his remarks at the event, described the fronting of ex governor  Nnmani as candidate of  PDP  as a great fraud which they must all join hands to  resist at all cost.

The former senate president and Nwobodo, hails from Enugu East senatorial district and at different times represented the zone in the red chambers of the nations National Assembly NASS.

Nwobodo, and Nnamani,  who had during the event endorsed the APC flag bearer, , boasted that he (Prince Eze), is likely to be the only candidate for Enugu East senatorial election and pleaded to be joined in the suit to seek ex governor Chimaroke Nnamani’s disqualification from the contest.

Chief Nwobodo, corroborated all that  Senator Nnamani, said and urged the electorate in the zone to “vote for Prince Lawrence Eze as the next senator of Enugu East senatorial district, just as he applauded  the APC candidate who has been using  his personal resources to  provide various social  amenities for his people, including construction of Asphalted roads in many communities .

Prince Eze in his speech, had assured the people of the district that if given the mandate to serve, he would protect the interest of the entire people of the zone, adding that he will also make their empowerment and responsible leadership his watch word.

“I want to thank all  our leaders  and supporters here present, for your for your continued encouragement, and assure you that I will not disappoint your if vote into office.

Our Correspondent reports that the event was attended by top chieftains of the APC in the state, including immediate past governor of the state, Barrister Sullivan Chime, 2019 APC gubernatorial candidate in the state, Senator Ayogu Eze, former Speaker of the state House of Assembly, chief Eugene Odoh, Enugu state chairman of APC, Dr. Ben Nwoye, the party’s candidate for various positions, among others.