“No Going Back On Ongoing Health Sector Union Strike” 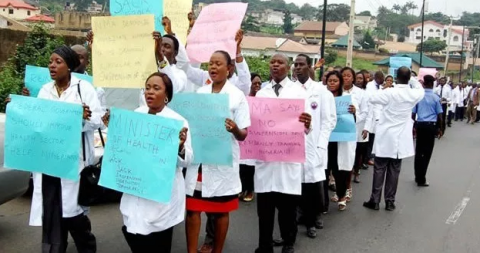 (AFRICAN EXAMINER) – The Joint Health Sector Union (JOHESU) has said there is no going back on its current industrial action until the Federal Government meets its demands.

Mr Biobelemoye Josiah, National Chairman of JOHESU, stated this on Friday at a news briefing in Abuja.

African Examiner reports that Josiah’s press conference is in response to a circular issued by the Federal Ministry Health allegedly threatening workers on strike with “no work no pay” rules.

His words: “We wish to intimate the general public to the bias, injustice and provocative antics by the Federal Ministry of Health.

“The antics include ensuring attendance register was opened during strike, enforcement of “No Work No Pay;; policy and employment of locum staff, respectively.

“We call on our members nationwide to disregard all forms of threat or intimidation from the government and ensure that services are withdrawn until our demands are met.

“We call on government to ensure equity and justice in the health sector instead of putting the health of Nigerians in jeopardy by resolving the issues on the table.

“Rather than churning out threatening circulars on register, locum and “No Work No Pay’’ that have no universal application, as a diversionary tactics,”

According to him,  government needs to refrain from action  that would further infuriate health workers and escalate already frail nerves.

He called on the Federal Government to quickly resolve the strike in the interest of Nigerians and all public health institutions.