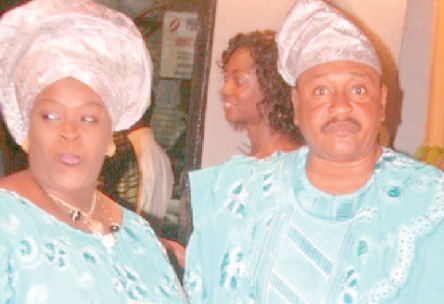 OGUN, NIGERIA (AFRICAN EXAMINER) – Wife of the veteran Nollywood (English and Yoruba) actor Jide Kosoko, Henrietta has passed on at 53.

Henrietta, who was also a prominent and celebrated Nollywood actress, was believed to have died Monday morning at the popular Sacred Heart Catholic Hospital, Lantoro, Abeokuta.

Although, there is no official confirmation yet from her immediate family members on her demise, still, Henrietta is believed to have died due to relapse of the health complications she suffered from an auto crash she was involved late last year.

Her remains, sources in the Missionary hospital has since been deposited at the morgue.

Among the early callers at the hospital Monday, was an Abeokuta based actor, Bolaji Amusan, also referred to as Baba Latin among other friends and family members.

Henrietta’s maturity, originality and pleasant mien will be missed by fans and followers of the Nigerian home video.