NSITF Probe: Another Drama as Ngige, Faleke Clash at Reps Hearing Over Tinubu 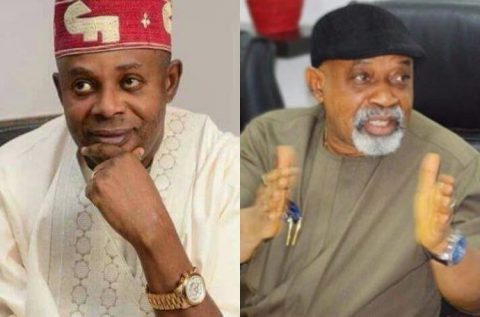 (AFRICAN EXAMINER) – There was a mild drama on Tuesday as the Minister of Labour and Productivity, Chris Ngige, and member representing Ikeja Federal Constituency, Lagos State, James Faleke, exchanged words.

The altercation occurred when the Minister appeared before the House Ad Hoc Committee on the Arbitrary Breach of Presidential Directives on the Suspension of Top Management and Executive Members of the Nigeria Social Insurance Trust Fund and Other Government Agencies by the Ministry.

Faleke, who is representing Ikeja Federal Constituency, is a member of the Committee.

Apparently infuriated by the poser fired at him, Ngige in a video clip that has gone viral on social media, launched verbal attacks on Faleke and his political godfather – the National Leader of the ruling All Progressives Congress (APC), Asiwaju Bola Tinubu.

In an enraged response, Dr. Ngige hit and said he was on the same level with the one-time Lagos State Governor – Tinubu.

He contended that apart from the fact that he and Tinubu were age mates, he was at per with the APC Chieftain with respect to political achievements.

When Faleke made a snap reply that Tinubu won his own election “very well”, a more enraged Ngige then fired back rhetorically; asked: ‘’who was a former deputy governorship candidate of the APC in Kogi State, how his struggle to replace his running mate and governorship candidate, Abubakar Audu, was frustrated after the latter died shortly after they both won the election.

In return, the former Anambra State Governor said: “I am responding. You yab me, I will yab you 10 times. I am a Lagos boy. You are just a small boy in Lagos. Look at this boy. Mushin boy is talking to a VI boy. I live in Victoria Island.’’

Recall that on Monday, the Acting Managing Director of the Niger Delta Development Commission (NDDC) Prof Kemebradikumo Pondei collapsed when grilled before the House of Representatives panel probing alleged N81.5bn fraud at the commission.