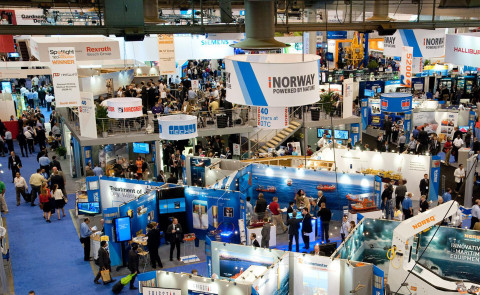 Houston, Texas, USA (8 May 2014) – Experts from the offshore energy industry around the world came together 5–8 May for the 2014 Offshore Technology Conference at Reliant Park in Houston. Attendance at the annual conference reached a 46-year high of 108,300 the highest in show history and up 3.3% from last year. 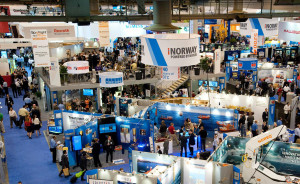 “OTC’s great success this year is yet another validation of the great vision inspired by the founders who created the conference in 1969,” said Ed Stokes, chairman of OTC. “Clearly the deep and broad coverage of the technical program, flanked and supported by excellent panels, executive keynote presentations, distinguished and spotlight award winners, as well as thousands of displays of the latest in new technology at the exhibition, continues to demonstrate the power of collaboration from our member engineering and geoscience societies and trade organizations moving the offshore oil and gas industry forward safely, sustainably and with due consideration of environmental protection.”

This year’s event featured nine panel sessions, 29 executive keynote presentations at luncheons and breakfasts, and 308 technical papers. Speakers from major, independent, and national operators; federal and regional government officials; academia; and more presented their views on a wide variety of topics while discussing views on the current challenges and future directions of the industry.

OTC’s Spotlight on New Technology recognized 12 technologies for their innovation in allowing the industry to produce offshore resources.

Safety and environmental protection, always key areas of focus at OTC, was at the forefront of many discussions including on Thursday when the day featured a special breakfast and luncheon focused on the subject.

Several sessions also delved into new opportunities in Mexico, including a topical breakfast and networking event on Tuesday which focused on Mexico’s energy reform, and an industry breakfast co-sponsored by the US Department of Commerce.

More than 150 Houston-area classroom teachers and 200 students attended the Energy Education Institute. Teachers learned about scientific concepts of energy and its importance in a fun and exciting way. Participating students saw firsthand the exciting opportunities the oil and gas industry can offer.

University students from across the country also got involved by participating in the conference’s University R&D Showcase while OTC hosted the annual Next Wave event, a program for young professionals, on Monday.

The Annual OTC Dinner was attended by more than 1,000 industry leaders and conference attendees, and raised USD $250,000 for Medical Bridges. OTC also presented its 2014 Distinguished Achievement Award to Carl Arne Carlsen, DNV; the Distinguished Achievement Award for Companies, Organizations, or Institutions was awarded to BP for its Clair Ridge development; and the OTC Heritage Award to Noble Energy’s Susan Cunningham at the sold-out event on the floor of Reliant Stadium.

OTC also announced during the closing reception a new event called “d5” that will debut on Friday, 8 May 2015—the day following next year’s conference. Designed to bring together the best thinking and creativity from inside and outside the E&P industry, d5 will create an environment where innovation and inspiration can occur so that the biggest challenges confronting the industry today, as well as those that will challenge it tomorrow, can be addressed.

The Offshore Technology Conference (OTC) is where energy professionals meet to exchange ideas and opinions to advance scientific and technical knowledge for offshore resources and environmental matters. Founded in 1969, OTC’s flagship conference is held annually in Houston. OTC has expanded technically and globally with the Arctic Technology Conference, OTC Brasil, and OTC Asia. For more information, visit www.otcnet.org/2014.