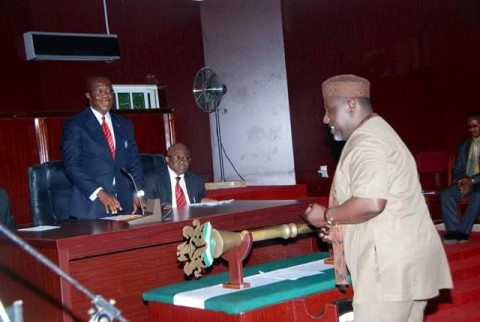 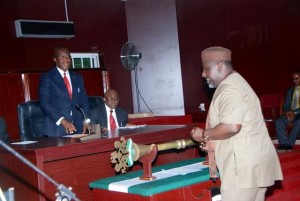 Presenting the Budget,  tagged “Budget of consolidating Rescue mission,” the governor disclosed that N75,271,768,434 is for Capital projects, while N61,383,872,587 would takes care of Recurrent Expenditure

He stated that the capital expenditure, which will take care of agriculture, commerce and industry, works and housing, transport and tourism, public utilities, lands and road development has a total allocation of N45,989,614,100.

The administration he said, also proposed to spend the sum of N671,614,100 on town and country planning survey as well as community development.

Okorocha hinted that government would  continue the restoration of Owerri master plan, pay compensation to land owners whose lands were acquired long ago, and  those acquired recently.

While the sum of N3 billion  was proposed for culture and tourism, the social services sector which include: Education, Health, Information, Women Affairs and Youth and Sports developments has a budget projection of N14.16billion, just as general administration has budgetary provision of N15.48billion

In the 24- page budget speech, Okorocha, announced that his administration would in the year 2014, establish a state wide Information Communication Technology (ICT) faculty network linking the state capital Owerri with all the 27 council areas in the state.

This, according to him, would commence in the first quarter of next year with Owerri taking the lead.

different locations in the state capital with a view to decongesting  the city, had assured that the state government would consolidate on the existing programs and projects geared towards the beatification of the state capital and the new cities in the 2014 fiscal year.

However, Okorocha, had earlier reviewed the performance of the 2013 budget and the achievements recorded, saying that as part of the drive to sustain the improved Internally Generated Revenue (IGR), the state government shall construct the new sub treasuries and revenue offices where non exist and  rehabilitation of  some existing one in the state.

Receiving the document from the Governor, Speaker of Imo state House of Assembly, Hon. Benjamin Uwajimogu, had assured the governor of its speedy passage after all necessary scrutiny.