Okorocha Wants Number Of Lawmakers Reduced to Save Cost 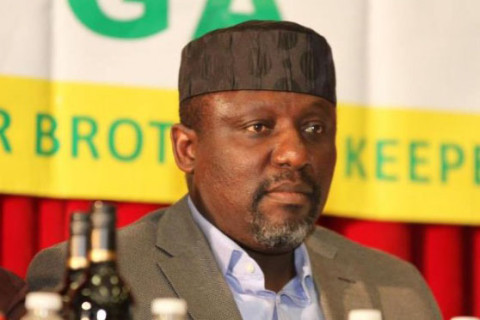 (AFRICAN EXAMINER) – Sen. Rochas Okorocha, (APC-Imo West) has called for a reduction in the number  of legislators.

Okorocha made the call, while briefing newsmen after the Senate approved the Medium Term Expenditure FrameWork (MTEF) and Fiscal Strategy Paper ( FSP).

Okorocha, who advocated for one senator and three House of Representative members from each state, said the reduction in the number of representation from the states would help cut cost and ensure effective representation.

The lawmaker who earlier at plenary raised the issue on the floor of the red chamber, said his constituency was too small for him.

He said that what three senators and several House of Representatives members could do for a state, four lawmakers could do it.

The senator said the nation’s annual revenue generation could not fund the budget for the year, because crude oil was the major source of income.

While advocating for ways to cut cost and ensure effective representation, Okorocha said he would sponsor a bill that would seek for the reduction of the number of senators and House of Representatives members for each state.

“I want one senator and three House of Representatives members per state, which will cut expenses.

“A senator and three House of Representatives members can do what many have been doing.

“We cannot keep doing the same thing and expect different thing to happen. We must cut our cloth according to the available yard,” he said.

He said the issue of poverty and hunger was on the increase, adding that government must help the masses and the poor by reducing the number of lawmakers in the National Assembly.

“There is need for constitutional amendment, rather than engaging many people in politics, we can have few in the national assembly while others can venture into other sectors.

“If we have a Governor in a state, one senator and three house of representative members can help in development,” he said.

He called on the Federal Government to invest more in agriculture to create more jobs.

The lawmaker said the senate must make laws and pass motions to support the executive adding that the legislators are the pivot for running government in a democracy.

“I will present the bill based on the mood of the national assembly, whether it starts now or later, we must do things differently.” (NAN).