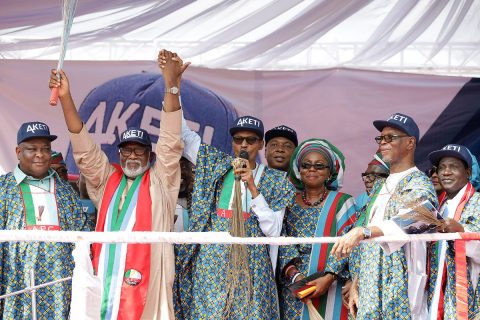 The President made the call Saturday in Akure, the Ondo State capital at a meeting with the State party’s Elders’ Council.

Buhari, commended all the APC Governorship aspirants for staying back in the party, despite losing in the party’s primary contest.

Mr. President commended the aspirants’ positive spirit and commitment, adding that he hoped that their constituencies were taking note of the prevailing development.

At the APC mega rally which held in Democracy Park in Akure, President Buhari thanked the APC supporters and residents of Ondo State for their peaceful conduct.

He also urged them to troop out and vote the party’s candidate, who was described as a successful, diligent and capable for the position.

The mega rally was graced by the bigwigs of APC, among whom were the Senate President, Bukola Saraki. Several Governors and serving Ministers were also in attendance.