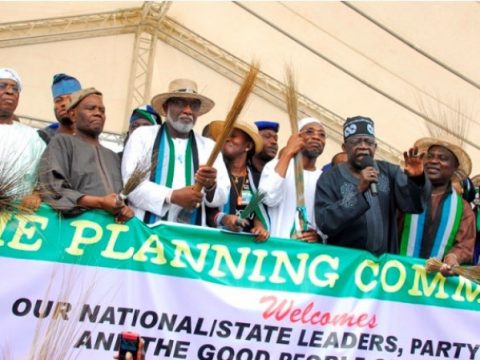 Still, there is a brewing concern about the APC National leader and former Lagos State Governor, Asiwaju Bola Tinubu, possibility of not being part of the mega rally. In addition to this are some of his allies such as the former interim National Chairman of the party, Chief Bisi Akande; Osun State Governor, Ogbeni Rauf Aregbesola and the incumbent Lagos State Governor, Mr. Akinwunmi Ambode.

The development is due to opposition of Tinubu to the alleged irregularity of the State party Governorship primary, won by Mr. Akeredolu (SAN) as well as his candidature.

The former Lagos State helmsman supported Dr. Abraham Olusegun who emerged second at the primary. However, he and strong ally, Aregbesola were believed to be the backbone of Mr. Olusola Oke who just defected and contesting under the platform of the Alliance for Democracy (AD). Oke emerged third in the controversial primary.