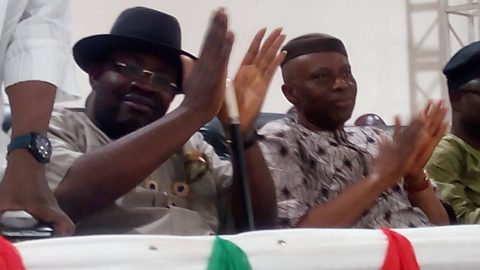 A statement issued on Tuesday night by the Special Adviser to the Governor (Media Relations), Francis Agbo, said Dickson in company of the PDP Spokesman, Prince Dayo Adeyeye, joined his Ondo State Counterpart, Dr. Olusegun Mimiko at the Akure Dome to address market woman association drawn from all the markets across the state, transport unions and non-indigenes of Yoruba extraction in the state.

Governor Dickson called on the People of Ondo State to vote for PDP Come November 26th in order to consolidate on the concrete achievements of the Mimiko administration. Having delivered on his campaign promise to the People, the Country man Governor said he was confident that the Ondo People will reciprocate the goodwork of PDP by voting en mass for the PDP.

Governor Dickson noted that both the APC and AD do not present a credible alternative to the people, stressing that the future of the state is greater and safer under the watch of PDP. Governor Dickson also calls on the Judiciary to urgently resolve all issues surrounding the Ondo PDP governorship ticket.

While expressing confidence that the PDP is in the process of rediscovering itself, Governor Dickson noted that Jegede truely emerged as candidate of the PDP in a transparent Primary Election conducted by a committee headed by him, and urged all PDP faithful and leaders to rally round the party.

”A vote for PDP is a vote for consolidation of development, peace and prosperity and I am confident that the good people of Ondo State know what is good and will not be decieved by the antics of the opposition.”