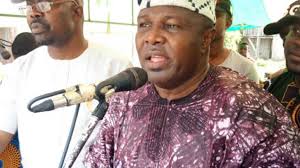 (AFRICAN EXAMINER) – Ondo indigenes in Diaspora, especially those from Ondo South Senatorial District have been called upon to support Senator Nicholas Tofowomo’s determination to impact positively on the people of the district at home.

The call was made by the Special adviser to the Senator on Diaspora and International Relations, Mr. Olusegun Erinle, while expressing joy at the return of Senator Nicholas to the National Assembly (NASS), after a fatal auto crash.

The aide who urged various Ondo indigenes across the globe to be ready to support their root said their exposure and expertise would be highly appreciated.

According to him, “Senator Nicholas is always on ground to enhance any foreign collaboration that would add value to the lives of his people”.

Mr Erinle who thanked the Senator’s colleagues, party loyalists, people from his senatorial districts, friends and families among others said, the September 5, 2019 accident, involving 4 occupants almost took the life of the Lawmaker, but to the glory of God his life was spared.

“Now that he has returned to the Senate, we cannot but express joy at the benevolence of God for preserving him. He is better now; his commitment to serve his people and enact laws that would better the society is re-ignited”.

Mr. Erinle, explained how Senator Tofowomo was always discussing moving Ondo South forward, as well as improving the lots of his people through legislative means even on his sick bed each time he visits the Hospital.

He commended his leadership by example style and the belief in the Nigerian system as the Senator insisted on being treated in Nigeria.