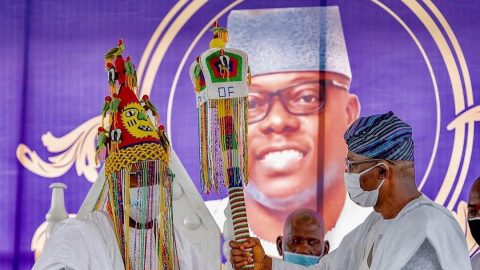 (AFRICAN EXAMINER) – The Omowunmi Abisogun Ruling House of Iruland, Lagos State,  has cried out that they have been arrested and molested by the new monarch.

It will be recalled that the royal families in Oniru and the new monarch, Wasiu Gbolahan, have been at loggerheads since the installation of the monarch as some families have accused the government of Lagos of imposing Wasiu Gbolahan on them.

The Omowunmi Abisogun Ruling House of Iruland, Victoria Island, stated this during a press conference alleging that since the imposition of the monarch by the state government, he has been a ‘torn in the flesh’ of all those who opposed his emergence.

Speaking on behalf of the family, Alhaji Suraju Durosinmi pleaded for the intervention of the Inspector-General of Police to come to the aid of the family to checkmate the illegal activities being allegedly perpetrated by the monarch.

The family said: “We have observed the reckless harassment, threat to lives and properties of members of the Oniru family and other residents of Iru-Land and its environs by the king, we equally observe the simultaneous attempt by the same force to legitimate his alleged illegal imposition through a so called ‘political reconciliation’ with some elements that have been part of the grand scheme used so far in the attempt to hijack the Oniru stool.

“Consequently upon his alleged imposition by Governor Babajide Sanwo-Olu against the ruling of the court that the status-quo ante should be maintained, meaning that all parties should stay action pending the outcome of the court’s decision; as well as the agreement reached at the office of Department of State Security, Oba Gbolahan has been embark on reign of terror targeted at usurping people’s properties with the infliction of bodily harm on those who resist him.”