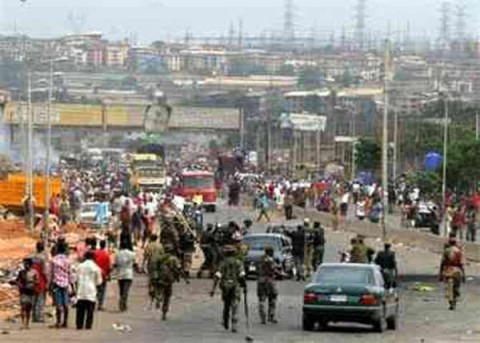 Commercial and social activities were on Friday paralyzed for several hours in Onitsha, the commercial city of Anambra state, as tricycle operators popularly called (Keke), staged a protest against what they described as “alarming rate of police extortion, intimidation and harassment of their members”. 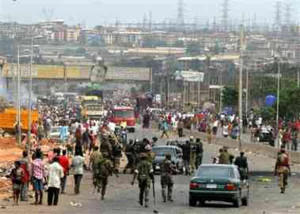 The protest, which sparked -off from the ever busy Denis Memorial Grammar School, (DMGS) roundabout, Onitsha, was later spread to various parts of the city.

One of the operators, Mr. James Uduma said, “Members of the Keke Drivers Association, took over the streets to express our anger over police extortion, harassments and illegal detention of our members”.

The protesters, clad in mourning clothes and mouth guard sang anti-police songs and brandished placards with several inscriptions such as “IGP please overhaul Police in Onitsha”, “Police in Onitsha are the most corrupt in the country”, among others.

In his reaction, Chairman of the Campaign for Democracy, (CD), South East zone, Mr. Dede Uzor, said the protest was in collaboration with CD against police atrocities in the ancient commercial city.

Thee Human Rights crusader, accused police in the area of resorting to intimidation, corrupt practices and illegal arrest and detention of tricycle drivers since the ban on checkpoints across the country.

He stated that corrupt practices among the policemen were more apparent in the commercial city of Onitsha, adding that policemen attached to the Central Police Station, Inland Town and Awada stations have been at the forefront for the alleged illegal detention and extortion.

“We are protesting against the illegal and corrupt activities of policemen in this city, they have made Keke drivers to remain perpetually in agony because of massive extortion, illegal detention and other inhuman treatments.

“It is also pertinent to note that majority of these drivers are driving these tricycles on hire purchase basis and when police kept on extorting them, most of them have no option than to drop the keke because they couldn’t meet up with the agreement they reached with the owners”, the activist maintained.

He therefore, called on the Inspector General of Police, (IGP) Mr. Mohammed Abubakar to as a matter of urgency overhaul the entire police stations in the commercial city with a view to bringing in new corrupt free police officers.

Also speaking, Secretary of the Keke Drivers Association, (KDA), Mr. Chukwudi Obi, accused police of deliberately arresting their members and in the process extorting money from them at the various police stations before releasing them.

The KDA scribe, appealed to the Anambra state Governor, chief Willie Obiano and the state Commissioner of Police, Mr. Usman Gwary, to wade into the matter, so as to call the policemen serving in the police divisions in Onitsha to order and  allow the citizens to carry out their legal business activities.

When contacted, the State Police Public Relations Officer, PPRO, Mr. Emeka Chukwuemeka dismissed the accusations, saying policemen in the state were there to maintain law and order while described the allegations as unfounded and frivolous.

Meanwhile, some of the Keke operators who spoke to African Examiner on condition of anonymity, described Onitsha policemen as “armed robbers in uniform”, warning that “if the police authorities failed to intervene, we would have no option than to resist this wicked and alarming extortion, because enough is enough, we didn’t go into keke business for these bundle of criminals, who called themselves policemen” one Okorie threatened.