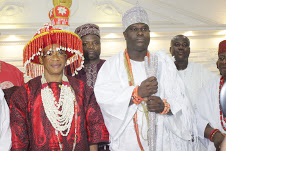 He spoke weekend when Igwe Nevobasi paid him a courtesy visit at his palace in Ile-Ife, Osun state, South- West Nigeria.

According to the revered Monarch, “by this visit to Ife ancient kingdom, Igwe Nevobasi of Mmaku kingdom has cemented the relationship between Yoruba and Igbo people.

“It is a memorable event to have Igwe Nevobasi in Ile-Ife this day. We appreciate the love you have for us. The handshake across the Niger should continue.

“We are happy with your cultural heritage, we are the real aborigines of African race.”  the Ooni declared.

The Ooni equally hailed  the philanthropic activities of Igwe Nevobasi, adding that  he has not only lifted the drooping spirits of the oppressed and the less privileged, but has also helped in promoting peace in his home state of  Enugu State.

African Examiner reports that just recently, Igwe Nevobasi donated two Hummer buses valued N25m to the Enugu Police Command to help the police in security of lives and properties in the state.

He had during the presentation of the vehicles said it was his own way of supporting what “Governor Ifeanyi Ugwuanyi’s administration is doing to ensure security in the state, as well as appreciate the Commissioner of Police in Enugu State and his officers and men for their achievement in the area of security”.

The Ooni said such gestures by the Enugu Royal father contributed in no small measure to activate the activities of security operatives in the state.

Earlier in his remarks, at the Ooni’s palace, Igwe Nevobasi stated that the visit was a royal handshake across the Niger and to identify with the Ooni’s project of maintaining national unity and cohesion among the people of Nigeria.

He, therefore, promised to work with the Ooni to sustain the existing peace and cultural affiliation between Yoruba and Igbo people.

“I will work with you. You are a moving train and have proven to be one, moving to many places preaching peace. I also ask for a return visit.”

The visit was a demonstration of culture as different dance groups rolled out their drums to entertain the audience.

Igwe had earlier made a stopover at Benin, Edo state capital, to felicitate with the commissioner of police Mohammed Danmallam for a successful conduct of the 2019 elections in the state.

He also thanked him for the security dexterity he displayed in Enugu state while he held sway as commissioner of police in the state.